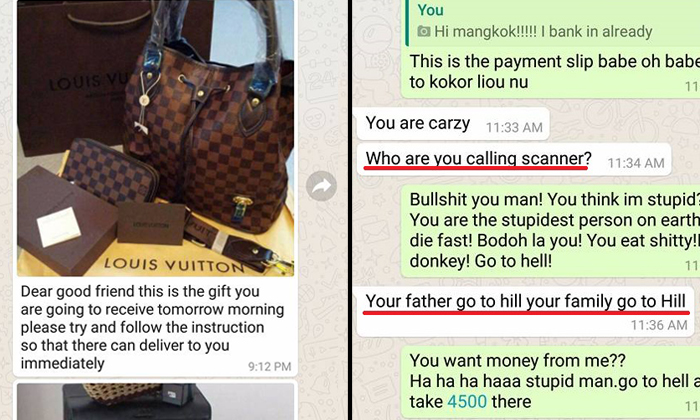 Online scams have become quite common in recent times.

A Malaysian woman, Jessica recently shared on her Facebook page how she got the last laugh on an alleged scammer, asking her for RM3,500 (S$1,123)  and her personal details.

According to Jessica, a Facebook user going by Johnson Chris had suddenly sent her a friend request out of the blue, reports World of Buzz.

Chris said that he was American and worked in the oil industry.

She accepted the request and the two started chatting not long after.

The two even exchanged numbers and messaged each other on WhatsApp too.

Chris suddenly told her that he had been awarded a huge contract and said he would reward her with lavish gifts such as luxury bags if the deal went through.

To do this, he claimed, he needed Jessica's full name and address.

This, of course, roused the suspicion of Jessica, and she realised that the man was a scam.

Instead of simply disappearing on him, Jessica decided to extract revenge and gave the alleged conman the address to a local police station and its corresponding phone number.

Chris attempted to convince her by having a 'local agent' call Jessica, claiming that all she had to do to receive the gifts was pay a fee of RM3,500 (S$1,123).

Of course, Jessica did not pick up the calls.

Chris started becoming aggressive, asking her why she had ignored the calls, asking Jessica,'why she wanted to hurt him'.

Jessica took the chance to curse the man and the 'agent' in Malay, which he clearly did not understand.

Jessica subsequently told him that she had made the transaction and sent over a 'receipt' of her payment, along with a photo of a chimpanzee.

Finally realising that Jessica was was trolling him, Chris became angry and well, attempted to insult her.

"Your family go to hill too."

Well, for an American working in the oil and gas industry, his English wasn’t exactly the best.

"This is how you deal with rubbish scammers.

"I noticed that he looked rather Chinese but the picture and name are fake.

“I feel so sorry for the person who had his photo stolen to be used for this scammer."