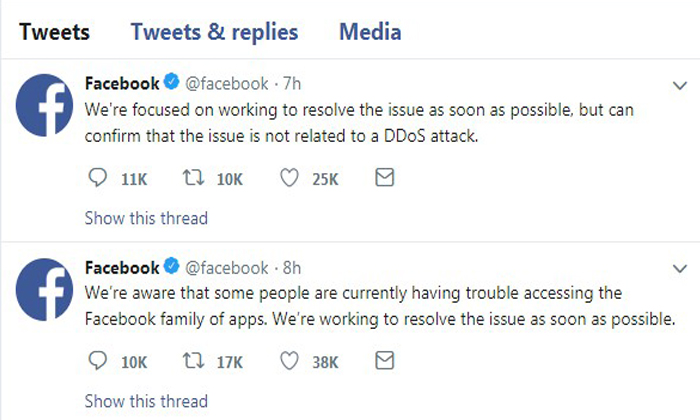 You try posting a photo on Facebook and Instagram, only to be told that 'something went wrong' and to 'try again later'.

Outraged, you attempt to send a screenshot via WhatsApp so that you can complain to your friends -- except that it's not working either.

Well, you are not alone.

Users around the world experienced difficulties accessing and performing certain functions on Facebook-owned products this morning (March 14) due to a widespread outage.

"This is not a universe I'm familiar with," thought this journalist when she woke up to zero notifications on some of her most-used social media platforms.

Facebook said in a tweet that the outage on its family of apps was not related to a denial-of-service (DDoS) attack and that it was working to resolve the issue as soon as possible.

Oculus VR and Messenger appear to be affected as well.

We're focused on working to resolve the issue as soon as possible, but can confirm that the issue is not related to a DDoS attack.

We’re aware of an issue impacting people's access to Instagram right now. We know this is frustrating, and our team is hard at work to resolve this ASAP.

According to the BBC, this is the social media giant's most severe outage in history.

But here are some things you can do instead of refreshing your apps non-stop.

1. Have a hearty breakfast

Make today the day that you finally put away your phone and focus on your food instead. Savour every bite and energise yourself for whatever plans you have ahead.

And no, a cup of coffee does not constitute breakfast.

2. Call your loved ones

Been meaning to call that dear friend or beloved family member, yet always putting it off? Now is a good opportunity to finally pick up the phone and catch up with them.

Trust me, they will appreciate it -- for texting through a screen will never beat what it feels like to hear your voice on the line.

Remember when you bought some sports equipment (a yoga mat in my case), thinking you would finally be a well-rounded and functional human being? Except that it has been sitting in a corner of your room and collecting dust.

Get up and get going -- there's no better time than now.

Don't feel like interacting with anyone? That's fine too.

Take some time off and lose yourself in a fictional world -- you deserve it.

You've read Marie Kondo's book and watched her Netflix show. The only thing you haven't actually gotten around to doing is tidying up your own room.

What are you waiting for?

6. Take a walk outside

When was the last time you took a stroll in the great outdoors because you wanted to, and not because you had to somewhere you needed to be?

Soak up the sunshine and some Vitamin D, appreciate your surroundings, and simply breathe.

Live in the moment.