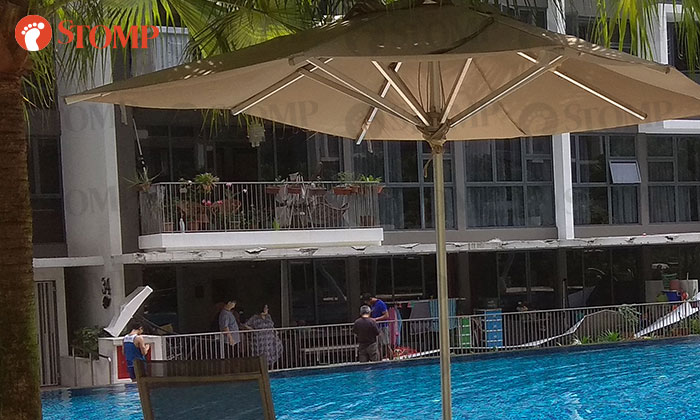 The extended shelter of a ground floor condominium unit at Blossoms Residences at Segar Road gave way on Sunday (April 15) at about 12pm .

Stomper Alfred, who stays on a unit on the 2nd floor, heard several loud bangs and went to investigate.

He was shocked to see the shelter had fallen off.

According to Alfred, the balcony of that particular unit was full of water.

Fortunately, though, no one was hurt, he said.

Many residents went to help out, and Alfred told Stomp that when he asked the occupants of the affected unit, they told him that they had informed the security and operation team about the incident.

They also told Alfred that they saw the shelter becoming ‘unstable’, after which it fell off.

Alfred said that the condominium’s security personnel and maintenance crew arrived at the unit at around 2pm.

They separated the fallen structure into smaller parts before carrying it out.

In response to a Stomp query, a Blossom Residences spokesman confirmed the incident and said that the shelter was erected by the owners of the unit.

She also said that no one was hurt in the incident.