Explosions heard as fire breaks out at Bedok Reservoir condo 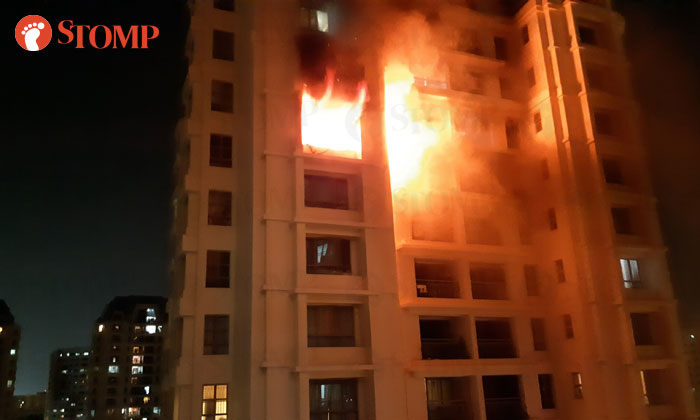 A fire broke out in a Bedok Reservoir condominium apartment in the early hours of Saturday morning (Dec 28).

Stompers Adrian, Sufi, JJ and Alvin alerted Stomp to the incident and shared photos and videos taken of the fire at Aquarius by the Park.

Alvin, who lives about 100 metres away from the condo, said he heard explosions from his home.

"It was frightening," he said.

"People were shouting and screaming.

"I could smell the smoke from my home."

"I was opening my Christmas present when I smelled burning smells," said JJ.

"Then, I realised it was at the Aquarius condo."

Adrian said about three to four fire engines arrived within five minutes after the fire broke out.

"First on the scene was the condo security who fought the blaze with fire extinguishers," he said.

"But the blaze was too huge, thick black smoke filled the air and they had to withdraw.

"Windows cracked, exploding and falling from the building.

"It was a danger to those on the lower floors.

"The fire was finally put out by firefighters at about 1.20am.

"Thanks to the security and residents who shouted and alerted other residents to the fire above as some residents were still in their units or in bed.

"Thanks to them and the firefighters, everyone is safe."

In response to a Stomp query, the Singapore Civil Defence Force (SCDF) said they were alerted to the fire at 3 Bedok Reservoir Road at around 12.40am.

"The fire involved the contents of a bedroom," an SCDF spokesman said.

"It was extinguished by SCDF using one water jet."

There were no reported injuries and the fire is under investigation.