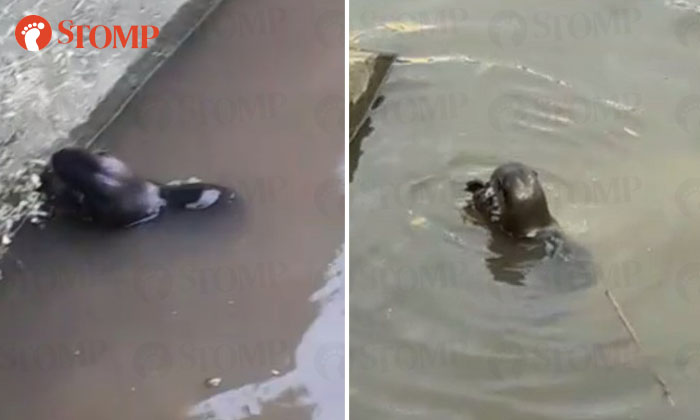 Mark was headed towards Pasir Ris Interchange and saw the otters from the upper deck of the double-decker bus at about 4.40pm.

He alighted immediately at the nearest bus stop and started filming himself walk towards the otters.

He said: "I was so excited when I saw them that I actually got off the bus.

"I saw about 10 otters from the window of the bus."

In the video, the Stomper talks about how he got off the bus mid-trip.

He then approaches the stream of water where small movements are seen.

Then, he clicks his tongue and an otter pops its head out of the water.

The video shows him focused on filming one particular otter, which manages to catch a huge fish.

The otter enjoys his meal while munching on the fish.

Squeals and loud crunches made by the otter can also be heard in the video.

Mark told Stomp: "I have seen otters before but only at the zoo.

"Seeing them in front of me was cool and I got excited when they responded to the clicking of my tongue and came close to me.

"I shared the video I took with my wife too."