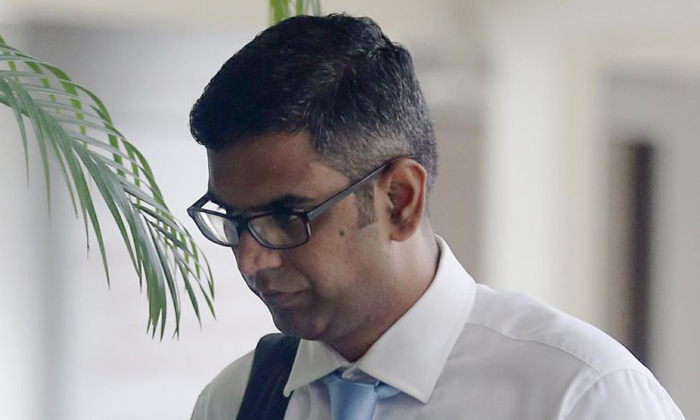 A former senior executive at Standard Chartered was fined $10,000 on Thursday (Aug 8) after he e-mailed a colleague anonymously and threatened to publish sensitive information about the bank on social media unless he was given $500,000.

Mr Aalishaan, 48, felt "very alarmed" when he read the e-mail on Sept 27 last year as it contained highly confidential data that could severely tarnish the company's reputation.

He alerted police, who traced Nagarajan and arrested him three days later.

Nagarajan, 36, pleaded guilty to one count each of harassment and dishonest misappropriation of property. He had spent 15 years working at the bank but is no longer employed there.

Nagarajan could have been jailed for up to six months and fined up to $5,000 for harassment.

But in his sentencing remarks, District Judge Marvin Bay said: "The fact that (Nagarajan) deleted the (e-mail) account immediately after sending the message makes it unlikely that (he) was operating with a view to financial gain.

"The facts show that Mr Nagarajan had been genuinely stressed over the retrenchment exercise he was assigned to undertake and these stresses had misdirected him toward committing the two criminal acts."

Quoting a medical report on Thursday, defence lawyer Chooi Jing Yen told Judge Bay that his client's judgment had been impaired when he committed the offences as he was feeling stressed over the retrenchment exercise.

Deputy Public Prosecutor Etsuko Lim told the court that workers had pleaded with Nagarajan not to terminate their employment, and he tried to persuade his line manager to discontinue the retrenchment exercise - but his line manager told him that it was a necessary cost-cutting measure.

Nagarajan was at his workplace in Changi Business Park Crescent on Sept 26 last year when he found an unattended iPhone belonging to a colleague.

He took the device and inserted its SIM card into his own mobile phone the next day.

The Indian national then created an anonymous e-mail account and prepared an article titled "Is Standard Chartered failing in its digital transformation agenda?" on his office laptop.

He also got hold of a report from his workplace shared drive, deleted its contents and keyed in his own input.

Nagarajan sent the article to Mr Aalishaan later that day, threatening to publish it on social media if he did not agree to pay him $500,000 by 11am on Sept 28 last year.

Soon after, Nagarajan deleted both a file containing the article and the e-mail account. He also got rid of his mobile phone at a jetty in East Coast Park.

Nagarajan was arrested on Sept 30.