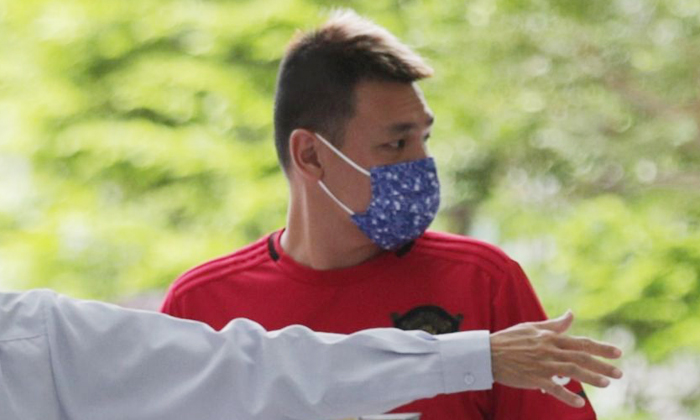 A Covid-19 safe distancing ambassador (SDA) who noticed that a store manager was not wearing a mask got into a scuffle with the man after they hurled vulgarities at each other.

The SDA, Aloysius Hoe Wei Peng, committed the offence in Yishun while he was under investigation over an earlier fight in Punggol.

The Straits Times understands that he is no longer working as an SDA.

He had pleaded guilty to one count each of assault, fighting in a public place, and committing mischief.

Hoe and Ms Raudzah Salehan, 35, were performing their duties as SDAs in Yishun Central 1 shortly before the fight broke out on Dec 16 last year.

Deputy Public Prosecutor Zhou Yang said that the pair were not wearing their lanyards with passes to show that they were SDAs.

Hoe then noticed that pet shop manager He Jun, 48, was not wearing a mask inside his workplace, called Little Pet Kingdom.

Hoe told Ms Raudzah to snap a picture of the store and she complied.

Soon after, Mr He approached her outside the shop to find out what she was doing.

Hoe, who was standing nearby, then asked the older man: "What's wrong?"

A quarrel broke out between the two Singaporean men and Hoe kicked Mr He who retaliated by throwing a nearby stone lion statue at him. The pair then grabbed onto each other and exchanged blows.

An eyewitness later stepped in to separate them, the court heard.

Mr He, who suffered from a swollen right hand, did not seek medical attention. He was fined $2,000 in June over the fight.

Hoe went to Khoo Teck Puat Hospital, where he was found to have sustained injuries including wounds to his chin, right forearm, and knees.

In an unrelated incident, Hoe and his former girlfriend Wan Farah Shireen Abu Hassan, 33, were walking on the first storey of Waterway Point shopping mall in Punggol on Feb 3 last year when food deliveryman Daniel Seah, 31, rode his bicycle between them.

Farah then shouted at Mr Seah: "Do not know how to say 'excuse me'?"

DPP Zhou said: "The victim alighted from his bicycle. He asked Farah for the reason for shouting at him and whether she was having premenstrual syndrome.

"In response, Farah and Aloysius confronted the victim and hurled vulgarities at him."

Hoe also stepped onto Mr Seah's spectacles when they fell to the floor during the altercation.

The court heard that Farah continued to attack Mr Seah after this and her case is still pending.

On Tuesday, lawyer S. S. Dhillon, who represented Hoe, said: "We understand the injuries caused to the victim were minor and he has since recovered... the incident was not a gang related one and no weapons were used."

For fighting in a public place, an offender can be jailed for up to a year and fined up to $5,000.