Ex-NUS student threatened woman he was stalking, told her: 'This will go on forever' 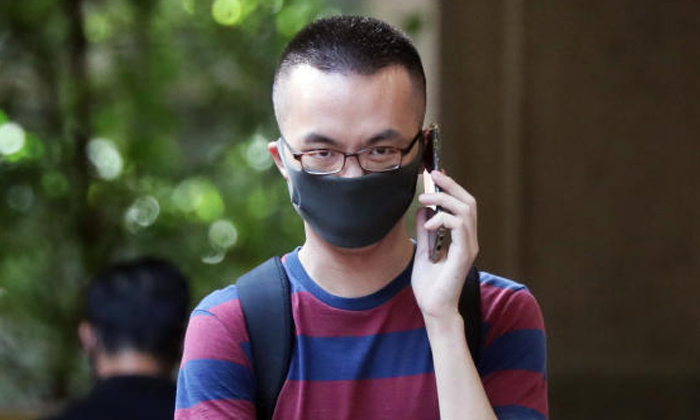 A former National University Singapore (NUS) student has admitted to stalking a woman for about a year and illicitly gaining access to her Telegram messages.

Ong Jing Xiang, 25, broke into her room on campus so that he could get a verification code on her phone that would allow him to access her conversations on messaging platform Telegram from his phone.

The woman cannot be named due to a gag order on her identity.

Ong pleaded guilty to one count of harassment and another under the Computer Misuse Act. One other charge of criminal trespass will be taken into account when he is sentenced.

Ong graduated from NUS this year.

Deputy Public Prosecutor Tay Zhi Jie told the court that Ong met the woman in 2017 and later developed feelings for her, but she turned him down.

In August 2019, Ong started monitoring her status on a messaging application and sent her multiple messages telling her not to respond to her boyfriend's messages.

He also demanded to know why she had been responsive to her boyfriend's messages.

He continued to pester her in December that year, leaving her more than 60 missed calls and 100 messages.

In January last year, Ong began knocking on her room door on campus to talk to her. He threatened to do so when she did not reply to his messages.

When she told him to stop harassing her, Ong threatened to find her, made references to her location and what she was wearing.

Some time on or before Jan 30 last year, he added his phone number to the woman's Telegram account after entering her room to get the verification code from her phone while she was in the toilet.

Ong then made references to the contents of her chat groups and claimed that he read the messages.

When she asked how he did so, he responded: "I have my ways to see it."

The woman told Ong he was infringing on her privacy, but he persisted and threatened to watch her very carefully.

Some time in or before March last year, the woman filed a complaint with NUS, but Ong increased the frequency of his messages to her, sending her up to 30 messages a day even if she did not respond.

He told her: "If u think this can be resolved by ignoring or not talking that's not happening. Lemme repeat, this will go on forever."

The woman lodged a police report on July 25 last year.

Ong only stopped contacting the woman when a No-Contact Order was issued to him by NUS on Aug 1 last year.

The woman said that since the incident she feels paranoid when people knock on her door. At the time, she had a constant fear of being under surveillance when she was online or messaging others.

Ong is expected to be in court next for sentencing on Nov 11.

Related Stories
Man threatened to kill woman, her mum and her BF after she ended their 'intimate relationship'
NUS student allegedly stalked woman and trespassed into her property on campus
Serial stalker sends over 5k messages threatening to kill woman after seeing her on CNN talk show
More About:
threaten
NUS
stalking
court