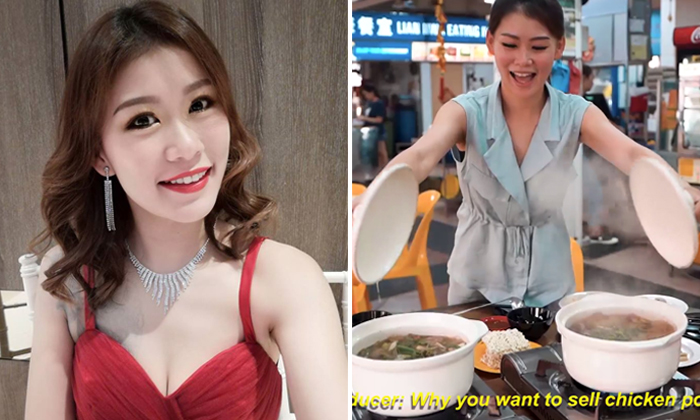 A 30-year-old woman who owns a hotpot stall at a coffee shop in Ang Mo Kio is making waves online for her good looks and equally mouth-watering food.

In the video posted on Nov 19, the mother of five affably shares what inspired her to start her business, how she came up with her recipe and what you can find on the menu.

She also said that her recipe "comes with lots of love" from her and that maybe customers love it very much because "it's made by a chiobu".

In the comments, many netizens who had visited Ling's stall before vouched for the delicious food.

Several also praised her beautiful and youthful looks, with a few likening her demeanour to that of 'S-hook lady' Lerine Yeo, who made headlines last year for her Facebook Live videos.

According to Lianhe Wanbao, the former model has had three marriages and gave birth to her first child when she was 17.

Thanks to the viral video, business has been booming even though the stall, which was opened in mid-July, operates for only six hours a day from 5pm to 11pm.

Ling prepares 40 chickens as well 2kg of handmade meatballs and dumplings for the stall daily, and they get sold out on some days.

Asked about her future plans, Ling shared that while she hopes to expand the business if it continues to do well, she wants to focus on what she is currently doing.

Related Stories
This Taiwanese goddess is more sizzling hot than the BBQ she's selling
Crowds flock to see 'Braised Sister' wielding cleaver, selling food at Taiwan stall
Flight attendant in viral photos says she would like to "focus more on my work with AirAsia"
More About:
beauty
food
coffee shop