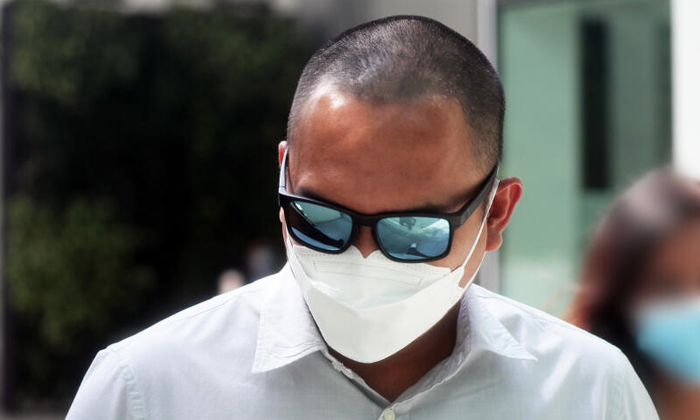 A police sergeant drew his loaded service revolver and pointed it at a full-time police national serviceman (NSF) after he did not volunteer for a visit to a supermarket as part of community engagement duties.

Mohammad Khairul Katmadi, 40, had committed the offence as a joke, a district court heard on Monday (March 28).

It also heard that the NSF, a special constable, did not report the incident promptly because he wanted to finish his national service without complications and feared repercussions.

Mohammad Khairul was sentenced to five days' jail on Monday after he pleaded guilty to one count of harassment.

The police told The Straits Times that he resigned on July 29, 2020.

The court heard that he is currently a part-time deliveryman.

His lawyer, Mr Gogulakannan Suppayya, said: "(Mohammad Khairul) thought he was making the point in a comedic way by using his revolver as a prop.

Sgt Tan got out of the car and asked one of the other three officers to follow him for the engagement visit to a Giant supermarket.

Neither NSF volunteered and they remained seated in the car.

Mohammad Khairul got out of the car, leaned in through the passenger door, unbuckled his revolver holster and drew the loaded gun.

He pointed it at one of the NSFs who could see the bullet heads through the chambers of the revolver and was alarmed, said Deputy Public Prosecutor Sunil Nair.

Mohammad Khairul did not cock the revolver, activate its laser beam, or put his finger into the trigger guard, the DPP added.

After a few seconds, he holstered the weapon, left the car and went to the Giant supermarket.

The two NSFs decided not to report the matter as they wanted to complete their NS and were worried about complications or possible hostility from Mohammad Khairul.

But the matter was brought up in conversation with another regular officer in June 2020 who escalated the matter and a police report was lodged.

Mr Gogulakannan urged the court to impose a fine, noting that his client was a good police officer and this was "just one glitch in his performance".

He added that Mohammad Khairul believed he was perceived by his colleagues, including the victim, as someone who often joked around, and this is why the victim did not report the incident immediately.

DPP Nair argued for five to seven days' imprisonment, and said: "Service revolvers are not issued to police officers to further their personal agendas, play pranks, or perform jokes."

On the delay in reporting the incident, DPP Nair said: "This shows the degree of influence that the uniformed service, and the regular officers representing it, have on the lives of ordinary national servicemen who are there to complete their services. Such offences can be hard to detect and should be deterred."

District Judge Kok Shu En said Mohammad Khairul, as a regular police officer, should have been guiding the NSFs and should have known better.

For causing harassment, alarm or distress to the victim, Mohammad Khairul could have been fined up to $5,000, jailed for up to six months or both.

The police said that all police officers go through training on the use of firearms, during which they are drilled on the safe handling of firearms and warned against any misuse.

Misuse carries serious consequences, including criminal prosecution, especially where the misuse endangers the officer or others, added the police.

They said officers are assessed if they are suitable to carry firearms through supervisory checks and engagement sessions, among other checks.

Officers are regularly reminded to follow safety rules and report any non-compliance or detection of misuse, added the police.

“There are processes in place for reporting such incidents in the Singapore Police Force, and all complaints are taken seriously and thoroughly investigated,” said the police.