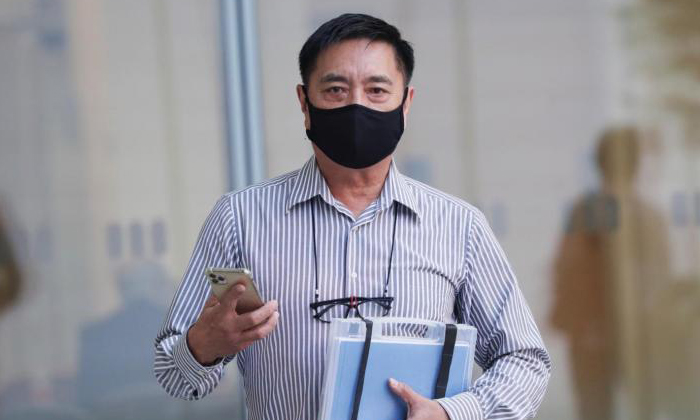 Retired local actor-director Ng Aik Leong, better known as Huang Yiliang, has been given a conditional warning over his pending affray charge under which he was accused of disturbing public peace by fighting with another man on June 9, 2018.

Ng is said to have used his mobile phone to repeatedly hit the man's head in Buffalo Road in Little India at around 7.15pm that day.

On Friday (March 25), District Judge Shaiffudin Saruwan gave him a discharge not amounting to an acquittal for this affray charge.

Those granted such a discharge can still be prosecuted for the related crime if relevant information or evidence were to emerge later.

Ng was earlier sentenced to 10 months' jail for assaulting a Bangladeshi worker in an unrelated incident in December 2018.

The 60-year-old Singaporean has since started serving his sentence for this offence after the High Court dismissed his appeal against his conviction and sentence last month.

Justice Aedit Abdullah also upheld an order for Ng to pay the victim $3,300 in compensation.

In a statement to The Straits Times on Tuesday, a spokesman for the Attorney-General's Chambers said: "Having reviewed the circumstances, including the fact that he would already be serving a sentence of 10 months' imprisonment for that matter, the prosecution decided to issue the accused with a conditional warning for the affray charge... and applied for a discharge not amounting to an acquittal."

Following a trial last year, he was found guilty in a district court of one count of causing hurt by a dangerous weapon.

The Bangladeshi worker, Mr Jahidul, 35, who goes by only one name, had testified that Ng frequently yelled at and threatened him, even challenging him to fights.

On Dec 11, 2018, Ng was upset with the worker for not following his instructions while doing some cleaning work.

Mr Jahidul told the court that Ng threw a plastic pail and wooden plank at him. The pail struck his back, forcing Mr Jahidul to climb down from a ladder he was on.

Ng then assaulted him with a scraper which had a 40cm-long wooden handle and a 15cm-long rusty, sharp metal tip.

Ng, who was not represented by a lawyer during his trial, claimed that Mr Jahidul had given him the right to hit him.

He said Mr Jahidul had told him: "I allow you to hammer me because I do things so slowly."

Ng had also claimed that Mr Jahidul was "acting" and exaggerating his injuries to make them out to be "100 times worse than they actually were".

This incident was not Ng's first brush with the law.

In 2012, Ng was fined $3,000 for assaulting a woman for failing to clean up after her dog. He had grabbed her by her neck and held her down while continuing to taunt her.

He left local broadcaster Mediacorp in 2008 to set up a production house.