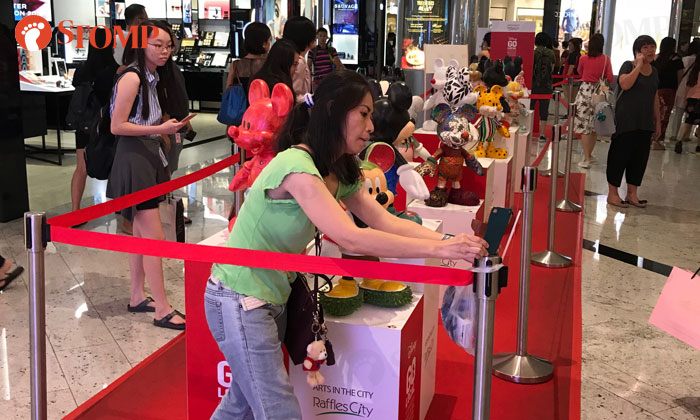 Stomper Joey was passing by a Mickey Mouse display at Raffles City on Saturday (Aug 11) when he saw a woman duck under retractable barriers surrounding the figurines to take selfies with them.

Joey described how inappropriate the woman's actions were with Stomp.

"The exhibit had been cordoned off to prevent the public from touching or getting to close to the Disney figures," he said.

"However, this did not stop the lady from jumping in and getting up close and personal in her quest for a selfie.

"When a passer-by told her off, she got very angry and scolded him.

"She even started taking photos of the man which I found quite funny."

The Mickey Mouse display includes 90 figurines of the famous character designed by local celebrities such as JJ Lin and Nathan Hartono, as well as professions across different industries.

The opening of the display marked Mickey turning 90 and paid homage to Singapore's heritage and culture.

The figurines are on display until Aug 29 as part of the mall's Arts in the City campaign.

Related Stories
Baby in India falls to her death after being dropped by mum who was taking selfie
What's this man doing taking selfies in the middle of the road at 4.40am?
Woman's leg amputated, man unconscious after getting hit by Bangkok train while taking selfies
More About:
selfie
inconsiderate
inappropriate
Disney