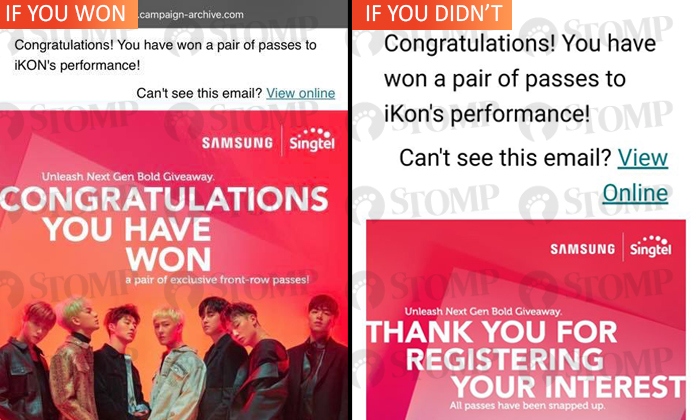 K-pop fans were elated when they received an email from Singtel that included a sentence congratulating them for winning a pair of passes to South Korean boy band iKon's performance.

Their happiness was short-lived, however, as it turned out that the sentence had been wrongly included in an email that was supposed to inform them that the passes had been snapped up.

Stomper Christina, who shared screenshots of the emails that she received from Singtel on Tuesday (Feb 19), shared how the mistake left her feeling crushed.

The telco had announced the giveaway on its Facebook page on Feb 15.

The first 20 Singtel customers to sign up for updates on the upcoming Samsung Galaxy launch would win front-row passes to Samsung’s Unleash Next Gen Bold event.

The event, to be held on Thursday evening (Feb 21) at Resorts World Sentosa, includes a live performance by iKon.

Christina was one of those who registered her interest.

On Feb 19, at 2.26pm, she received an email from Singtel about the giveaway.

Even though the email came with a poster that thanked recipients for registering their interest and which stated "All passes have been snapped up", it began with a sentence that said:

Congratulations! You have won a pair of passes to iKon's performance!"

However, Christina later received another email from Singtel at 5.49pm that clarified the error.

The email, which had [Correction] in its subject line, said:

"Earlier today, we had sent you an email regarding the Unleash Next Gen Bold giveaway. There was a line that incorrectly stated that you had won a pair of passes to iKON’s performance. We sincerely apologise for any confusion caused and thank you for your understanding."

Singtel also apologised on its Facebook page for the confusion, adding that all 20 winners will be contacted separately.

It is understood that actual winners received an email with a different poster that featured iKon.

The error has not sat well with Christina and other affected fans, who responded to the Facebook post with angry comments.

One user wrote: "You have disappointed iKonics through and through," referring to the fandom name that fans of the K-pop group give themselves.

Some also said they had already made arrangements to their schedule in order to attend the event.