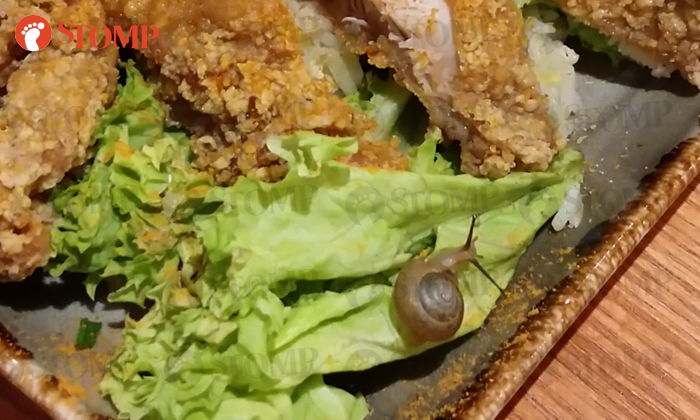 We all like newly-prepared food, but Stomper L's fried rice was so fresh that it came with a live snail that she did not ask for.

L said she was having dinner with a friend at Taiwanese restaurant Eat At Taipei in Tampines Mall last Thursday (June 7), at around 8pm, when the incident occurred.

The two of them had ordered three items: mee sua, dumplings, and chicken cutlet fried rice.

L told Stomp: "The mee sua came first and so, had already been consumed.

"The other two dishes took a while to come.

"My friend was eating the fried rice and we were seated side-by-side, so I noticed something wriggling. It turned out to be a huge snail.

"We called the wait staff over and an auntie exclaimed 'aiyo'.

"She took away the dish and offered a replacement, which we declined."

L said in a phone interview that she paid for the mee sua that was already consumed, but did not pay for the other two dishes.

She and her friend subsequently went elsewhere to have dinner.

"I reckon that the vegetables were not washed properly and had been thrown onto the dish (together with the snail), and then served to patrons," added the Stomper.

"In terms of service recovery, the way it was handled was disappointing.

"The kitchen really needs to improve on the hygiene of their food."

L also said that she informed Creative Eateries, which owns Eat at Taipei, about the incident, but did not get a reply.

Stomp contacted Creative Eateries on June 8 but did not get a response.

Related Stories
This is why you should focus on your food instead of phone when eating
Aloha Poke maintains 'A' hygiene rating after dead spider found in salad bowl
Diner finds 'fried egg' in PS.Cafe's mee goreng hard to chew -- only to realise it's plastic wrap
More About:
food
restaurant
unhygienic
disgusting
insects