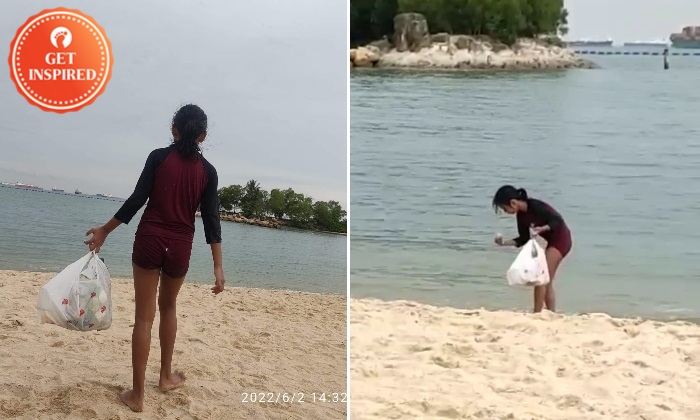 For families with young children visiting Singapore, one of the most popular attractions to check out is Universal Studios Singapore (USS) at Resorts World Sentosa.

The ticket prices for USS are $58 per non-local child aged four to 12 and $77 per non-local adult. Children under four get in free.

For Emily, her husband and two daughters from the Philippines, the prices were perhaps beyond their budget. So they headed for a beach on Sentosa on June 2.

On the beach, her oldest daughter, Yang Keai, 9, started going around with a white plastic bag and picking up litter.

Posting a photo and video of her daughter on the Sentosa beach in the Everything Singapore by Stomp Facebook group on Sunday (June 12), Emily wrote: "This Filipina girl from [the Philippines] went to Singapore for a short trip and she never got a chance to enter Universal Studios because the entrance fee is expensive.

"So what she did was go to the beach to pick up rubbish with her little sister and they really enjoyed it."

Emily told Stomp that Yang Keai would always pick up the rubbish not only on the beach but also on the street.

The mother said: "I feel very proud because wherever she goes, she always thinks about saving the environment."

Emily and her daughters, the younger of whom is six, were in Singapore from May 25 to June 6 to visit her husband, who works in security here, and the girls' grandparents.