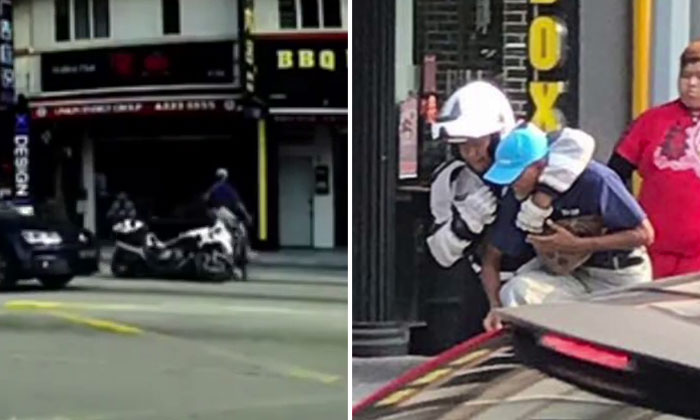 A 54-year-old cyclist was arrested for drug-related offences after causing a Traffic Police (TP) officer to skid and fall trying to avoid him.

The man had recklessly cut across traffic along Geylang Road.

According to the time stamp, it happened yesterday (Feb 21) at around 5.40pm.

In the video, a cyclist is seen cutting across traffic flow without waiting for a break or for vehicles to stop.

Some motorists managed to stop in time to avoid hitting him but by the time the officer saw the cyclist, it was too late.

In an attempt to avoid him, the officer skid and fell off his bike, hitting the cyclist's back wheel and causing him to fall as well.

They both get up and the officer is seen talking to the cyclist while gesturing at the road.

Fortunately, neither appeared to be badly injured.

"The police confirmed that on February 21, 2018 at about 5.46pm, an accident involving a Traffic Police motorcycle and a bicycle had occurred along Geylang Road towards Kallang Road before Lorong 4 Geylang.

"A 54-year-old man was subsequently arrested for drug-related offences. No injuries were reported. Police investigations are ongoing."