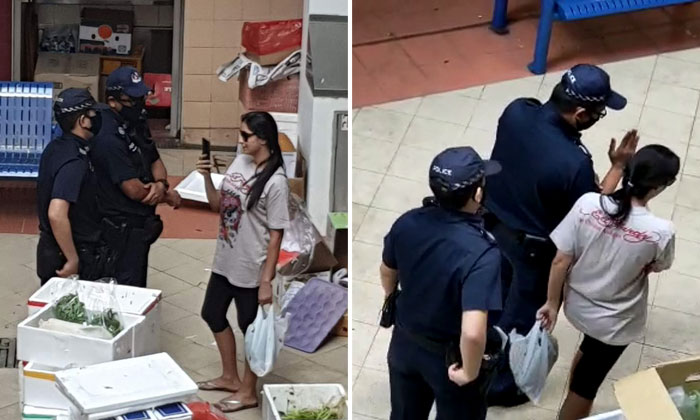 Enforcement action was taken against a woman who turned aggressive after she was approached by SG Clean Ambassadors for not practicing safe distancing at Shunfu Mart Food Centre on Tuesday (Apr 14).

The National Environment Agency (NEA) said in a statement on Tuesday that the woman had insisted on having her meal at the cooked food section of the hawker centre at Block 320 Shunfu Road.

Dining-in is not allowed at dining areas of cooked sections of hawker centres during the circuit breaker period from Apr 7 to May 4.

She remained non-compliant and even acted provocatively when approached by NEA enforcement officers so police had to be called in.

Several Stompers alerted Stomp to a video circulating online of the woman refusing to cooperate and taking photos and videos of police officers.

"NEA takes a serious view of those who verbally abuse our officers and SG Clean Ambassadors," said the agency.

"We will not hesitate to take strong actions against such egregious offenders, including criminal prosecution if necessary.

"Cases of physical or verbal abuse will be reported to the police for follow-up, and these cases will be considered separately from the principal offence that NEA will be charging the offender for."

The NEA said this case was one that arose during inspection rounds conducted from Apr 13 to 15.

A total of 19 enforcement actions were taken against members of the public for violations of safe distancing requirements at markets and cooked food sections of hawker centres.