Employment agency that 'sold' maids on Carousell has licence suspended 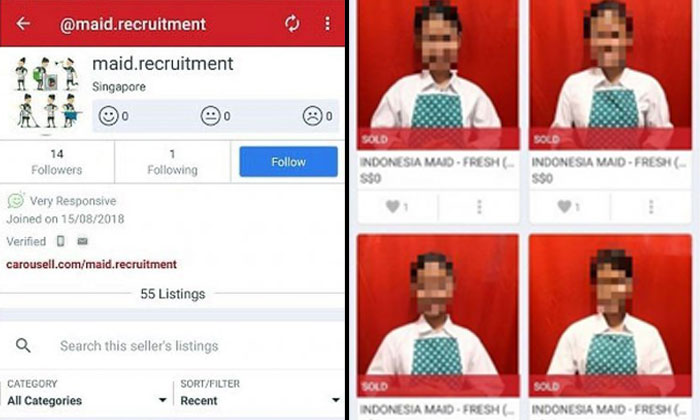 An employment agency has had its licence suspended after it was found to be behind "selling" maids on online marketplace Carousell, the Ministry of Manpower (MOM) said in a statement.

The MOM was alerted to the postings on Sep 14 and said in a Facebook post it was "aware of cases where foreign domestic workers (FDWs) are being marketed inappropriately on... Carousell".

It also warned other employment agencies against such practices.

The listings were put up by user @maid.recruitment and showed the faces of several maids, allegedly from Indonesia, with some even indicating that they have been "sold".

In its latest statement on Sep 19, the MOM said it has established that employment agency SRC Recruitment was behind the advertisements.

The ministry said that the agency has since been served with a notice of licence suspension and can no longer deploy any new FDWs for employment.

The Ministry of Manpower (MOM) has...

Posted by Singapore Ministry of Manpower on Wednesday, 19 September 2018

It also said it is investigating the agency with the view to take prosecution actions for infringements under the Employment Agencies Act (EAA).

Mr Kevin Teoh, Commissioner for Employment Agencies, said: “The MOM is committed to protecting the well-being of FDWs in Singapore. We strongly condemn the advertising of FDW services in an undignified manner. Advertising FDWs on an internet platform meant for trading goods is completely inappropriate and unacceptable. Such an act is an offence under the EAA. The Ministry takes a very serious view on this matter, and we will not hesitate to take prosecution actions on errant EAs.”

Carousell has since suspended the account and removed the listings after the ministry told Carousell to take down the offending posts.

Manpower Minister Josephine Teo shared MOM's statement on Facebook and said she was "deeply disturbed" by the advertisements "selling" maids.

"Advertising and marketing FDWs in such an undignified manner is not only insensitive, but absolutely unacceptable," Ms Teo wrote, condemning the action.

"FDWs provide caregiving and household services support to many families in Singapore," she said.

"To many of us, our FDWs are a part of the family.

"It pains me to think that our FDWs, all of whom are someone’s daughter, sister and possibly even mother, are being marketed in such a manner.

"It is a given that we should treat them with respect."

The MOM also said in its statement:

"MOM expects all EAs to exercise a duty of care towards their clients, including FDWs.

"The Ministry sternly warns EAs against similar actions that would denigrate the dignity of FDWs working in Singapore."

The Ministry is also in touch with the Indonesian Embassy and have informed them that it is investigating the case.