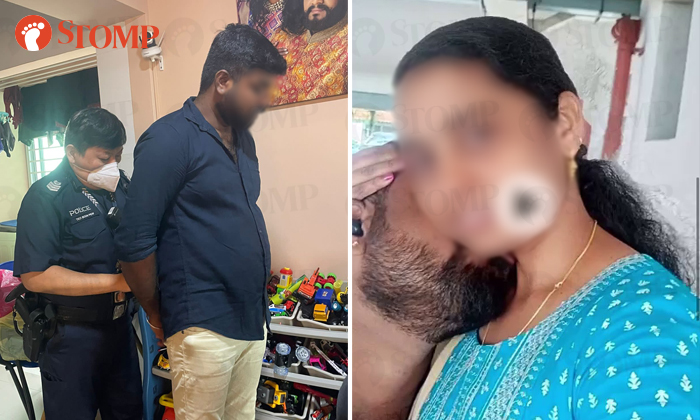 It was the ultimate horror and betrayal of trust for a woman who caught her domestic helper having sex with a man in her home on Sunday (Sept 11).

The man was subsequently arrested by the police in Stomper Shalini's four-room flat at Block 107A Canberra Street.

Shalini, who lives with her husband and four-year-old son, said the maid has been with them for three years and never thought something like this could happen in her own house.

She told Stomp: "Normally, there would be people around constantly. My husband works from home but that day, he had to run some errands and I was visiting the temple.

"When I woke up in the morning and before going out, I told my maid to sleep in since it's her day off. However, she literally slept with another man."

All hell broke loose after Shalini returned home from the temple at around 11.45am.

She recounted: "I stepped into my house after visiting the temple. I noticed that my master bedroom's door was closed and heard some thumping noises coming from there.

"I was appalled when my maid came out apologising to me in Tamil. She kept saying 'Akka (sister), I'm sorry, I'm sorry'.

"I immediately bawled as I knew that there was another person in the room. I saw an unknown man getting dressed and was so devastated when he came out from my master bedroom approximately three minutes later. I cried as that was the first emotion I had: Betrayal.

"I held the door as I didn't want them to escape. I was so distressed that I couldn't remember what number to call for the police. I was so shocked, appalled, dumbfounded and trembling."

The Stomper eventually managed to call her husband, who happened to be just five minutes away.

For Shalini, the incident was exceptionally hurtful and shocking because she had always treated her maid "like family". The domestic helper, who is from India, has every Sunday off and draws a monthly salary of $700.

"My maid had been with me for almost three years and I could not come to believe that this happened in my house," Shalini shared.

"I had trusted her so much all this while. She was good at her work, be it general chores or taking care of my son, like picking him up from school.

"I treated her like family and would even buy her the same clothes. I think I made a mistake there, being too lenient because it's my nature."

Shalini said her maid and the man have been seeing each other for "some time", adding: "I confiscated both their phones and saw countless videos of them being sexually active every week."

She showed Stomp texts between the couple. There were also multiple pictures of them hugging, kissing and behaving intimately. 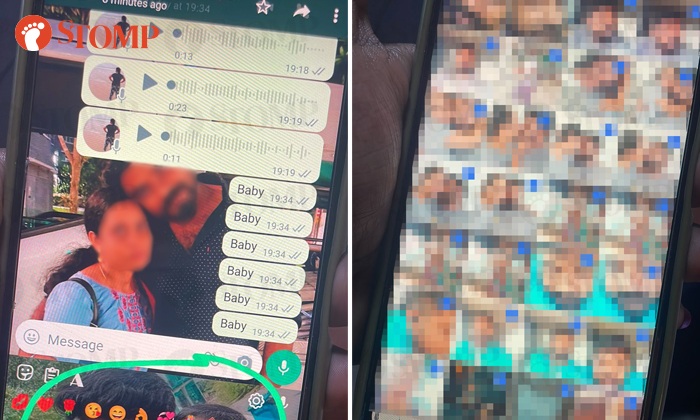 However, Shalini believes that this is the first time her maid has been brazen enough to bring the man home.

She explained: "There are usually people at home all the time, especially in the last two years due to the pandemic.

"My maid usually sleeps in the common room on a mattress. She doesn't enter the master bedroom on normal days. Why couldn't they have gone to a hotel or gotten a room elsewhere?

"Police came and arrested the man for unlawful trespassing. I am grateful that they took swift action instead of mediation and letting him go free.

"I was shocked when the police took out a beautiful pair of silver handcuffs and put it on the man as I was not expecting it."

According to Shalini, the man was taken to the police station. Shalini and her husband also had to go down to give their statements.

The Stomper said: "I booked a flight and sent my maid back home at 8pm on the same day. It was expensive but I didn't care. I just wanted to get rid of her.

"I want to extend my thanks to the police. In the moment when I saw the man being arrested, I felt like a true-blue Singaporean and was glad to be protected by the law.

"I am sharing this because I want people to know that if this happens in your household, you can count on the police. The police are there to help."

In response to a Stomp query, the police said they received a call for assistance at 11.46am and arrested a 31-year-old man for wilful trespass.

Asked what her next steps are or if she plans to get a new domestic helper, Shalini told Stomp: "I am not ready yet as the trauma is still fresh. What happened that day still flashes in my mind.

"It was such a betrayal of trust."

Related Stories
Her maid spilled hot soup on son, left sex aids around house and took photo of naked daughter
Family hounded and threatened by loan sharks after maid borrows $1k from them
Reasonable or too much? Maid shares list of 12 rules that she has to follow
More About:
arrest
trespass
maid
couple
police
sex