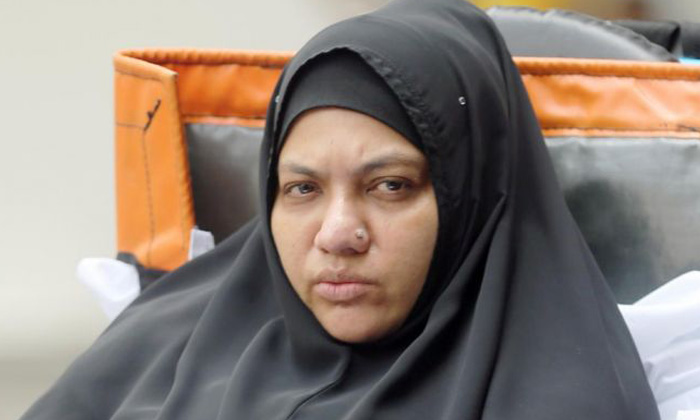 A woman felt giddy midway through her hearing on Oct 10 as her lawyer was arguing for her to be given a fine instead of a jail sentence in an abuse case that had left her maid with permanent scars.

Anita Damu, 50, had pleaded guilty to five charges of maid abuse during a hearing on Sep 22 after she had abused her 29-year-old Indonesian maid, Ms Siti Khodijah, periodically for more than a year, reported The Straits Times.

During that period, she had deprived her maid of meals and rest.

She also assaulted her frequently with household items which included a bamboo pole, slippers and a pair of pliers.

Ms Siti, who was employed by Anita's family in Oct 2013, was made to work from 4am to 11pm every day with no rest days.

Anita also controlled her food intake and only provided her breakfast and dinner in specific amounts.

After Jan 2014, Anita would only provide her maid with lunch and dinner twice or thrice a week.

It was during this period that Anita started abusing her physically.

Whenever Anita felt that Ms Siti had made a mistake, she would slap her on her face and body.

Other physical attacks included using a bamboo pole to knock her on her head as well as pliers to pinch her body.

On one occasion between May and June 2014, Anita even splashed hot water on Ms Siti's leg and body after she found that her maid had consumed a single longan fruit without her permission.

She also scalded both of Ms Siti's hands for working too slowly with a hot iron in August that year.

Court papers revealed that the many months of abuse endured by Ms Siti had left her with bruises and permanent scars all over her body and hands.

On Apr 23, 2015, a Ministry of Manpower (MOM) official visited her home and found out about the abuse from Ms Siti.

A police report was made by the official on the same day.

Anita then told a police officer that she had abused Ms Siti as her work did not meet her expectations.

In an earlier court hearing this year, Anita's lawyers said that she had been suffering from a major depressive disorder and had psychotic episodes where she heard voices.

During the court hearing on Wednesday (Oct 10), prosecutors had proposed a jail term of at least four years before she suddenly took ill while she was in the dock.

District Judge Terence Tay then had to stop proceedings to allow her family members, who were in court, to approach her.

She had to be taken to the hospital by an ambulance and is currently out on bail.

The hearing will continue on Oct 30.

Related Stories
Woman accused of beating maid acquitted of charges, judge found statements inconsistent
S'pore teen writes open letter to semi-D neighbour who allegedly 'starves' and 'confines' maid at home
Family responds to accusations of them forcing maid to sleep outside condo while they were on holiday
More About:
maid
maid abuse
violence