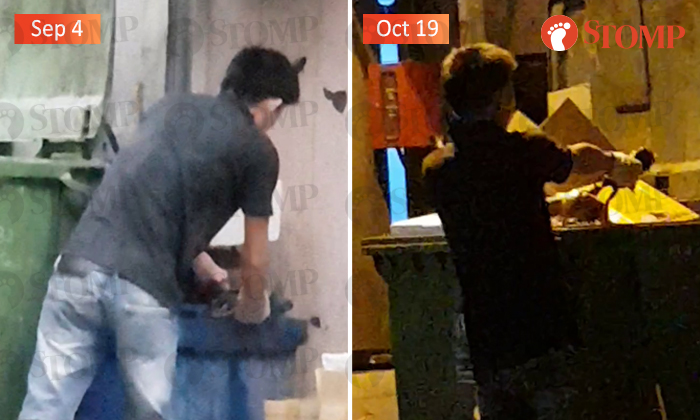 The Agri-Food & Veterinary Authority of Singapore (AVA) is investigating the Stomper's feedback.

Stomper Concerned Citizen witnessed a man slaughtering live frogs along an alley in Bugis on multiple occasions, which he felt was both unsanitary and inhumane.

Concerned Citizen told Stomp that he saw the man, identified as an employee from a hotpot restaurant along Liang Seah Street, "gutting" live frogs on three different days.

"I cannot remember when was the first time, but the second time was on Sep 4 after lunch, and the third time was last Friday (Oct 19) at around 7.45pm," he said in a phone interview.

"The employee (most likely kitchen staff) from a hotpot outlet 'Kuan Kuan Spicy Hotpot & Nourishing Soup' along Liang Seah Street (opposite the 7-Eleven store) was seen by myself taking out a frog out from a blue rectangular container on the ground behind the shop (which is a narrow service road between Liang Seah Street and Tan Quee Lan Street)."

Concerned Citizen shared videos that he filmed on Sep 4 and on Oct 19, showing whom he believed was the same employee both times.

In this video, the man appeared to be snipping off the frog's limbs.

In this incident, Stomper Concerned Citizen believed that he saw the man "pulling out the frog's insides" with an unidentified object.

Added the Stomper: "The male employee picked up a live frog which was kept in a large blue rectangular container on the ground.

"The frog (still alive) was then gutted over the big green dustbin just outside the kitchen.

"I strongly believe there are other frogs in the blue container and that they are kept there until they are needed for the kitchen, with the cover left ajar just for air. There are other stuff piled on top of this cover.

"The first time I witnessed this happening, an employee (the same man) cleaned out the blue container by pouring the contents (some dark liquid) into the drain."

"1) Questionable food hygiene due to containment of the live frogs"

"4) Possible animal cruelty as to how the frogs were kept"

Stomp contacted Kuan Kuan Spicy Hotpot & Nourishing Soup on Monday (Oct 23) and spoke to a man who identified himself as the manager. 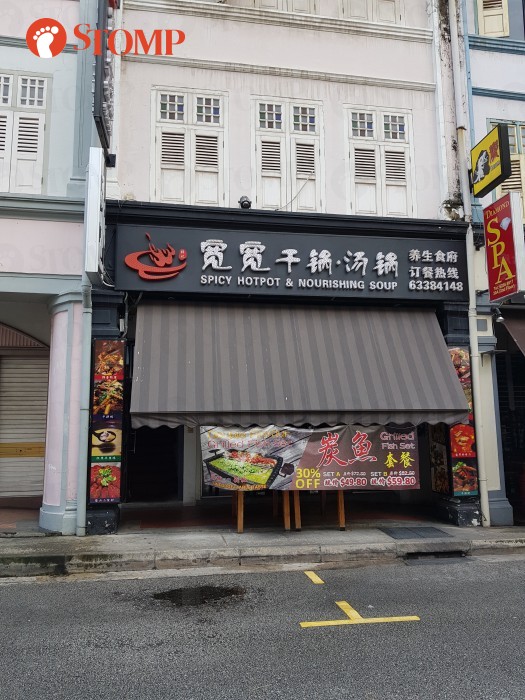 When informed about what the Stomper had witnessed, the manager did not appear surprised and replied: "This was from two days ago, right?" before Stomp had conveyed exact details regarding date and time.

According to the manager, the employee caught on video was just helping out and not the one who usually prepares the food.

As such, the employee "did not know" how it should have been done, said the manager.

When asked about the Sep 4 incident and told that it involved the same employee, the manager sounded surprised.

He said that the restaurant is usually busy on Fridays to Sundays and that is when extra help is needed.

During the phone interview, the manager also acknowledged both food hygiene and animal cruelty concerns.

He acknowledged that the handling and preparation of the frogs had been done in a public place as well as how it violated food handling practices.

Asked about how the frogs are usually killed, the manager said it was "similar to fish", where a hammer is used to "knock the animal out first".

When Stomp questioned if this was the case for the incidents caught on video, the manager replied: "Probably not."

Repeatedly apologising after acknowledging the lapses and vouching that there would not be a reoccurrence, the manager told Stomp: "If it happens again in the future, then I will take responsibility for the consequences."

Stomp has reached out to the relevant authorities for comment.