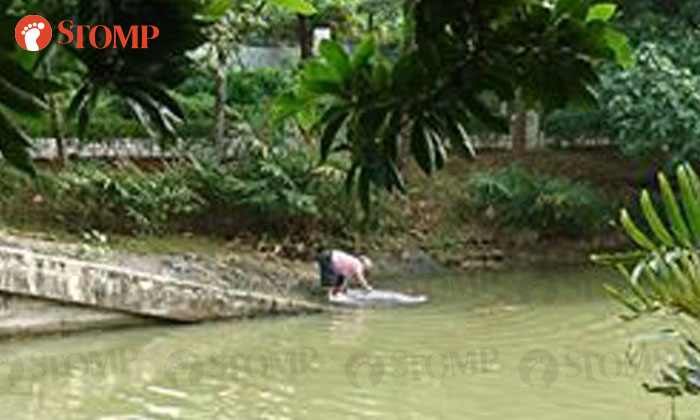 An elderly woman washed her rug at Punggol Waterway this morning (Dec 13).

Stomper J, who is a resident of Punggol, was walking her dog along the waterway at about 9.10am, when she saw the woman.

The Stomper said: "I frequently walk my dog along the waterway, but I have not seen the elderly woman before."

She took pictures of the woman and sent them to Stomp.

The pictures show a woman in the shallows of the water, bending down with something in hand.

There is an ofo bicycle parked behind her.

Stomper J added: "I couldn't see if the woman was using soap, but I could see and hear her scrubbing the rug with a brush.

"I don't think it is right to wash your laundry in the waterway.

"I think it is a form of pollution. There are even signs along the waterway urging people to keep the environment clean."

The Stomper also brought up volunteer group Waterways Watch Society (WWS) and said: "The act of washing her rug in the waterway also wastes the WWS' hard work in keeping the waterway clean."