Elderly woman injured in accident at Tanglin Halt Rd: Driver gave her $50 and drove off 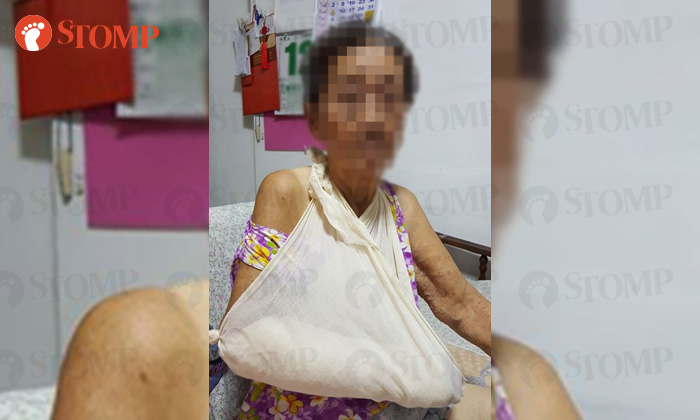 A 78-year-old woman injured her wrist after getting hit by a car at an open carpark at 30 Tanglin Halt Road on Oct 10 at about 12.30pm.

After the accident, the driver of the vehicle stopped and escorted her to a nearby coffeeshop.

He then gave her a $50 note and drove off without leaving any details while mentioning that he was late for a meeting.

Stomper Chan, the daughter of the woman, alerted Stomp to the incident.

"My mother was crossing the road and making her way into the carpark when this car sped past her," she said in a phone interview.

According to her mother, the car hit her shopping trolley first from its side before hitting her, causing her to fall down.

Immediately afterwards, she saw a neighbour who happened to witness the accident.

Her mother then asked her neighbour to write down Chan's number on a piece of paper which she then gave to the driver asking him to call Chan, but according to Chan, the driver never called her.

"A passerby called me and passed the phone to my mother while I was working," she said.

"My mother then informed me about what happened and I immediately rushed down.

"After seeing her injured hand, I brought her to a nearby family clinic.

"The doctor later referred my mother to the Accident and Emergency Department at Singapore General Hospital (SGH), where she received an operation for her injury."

Chan added that the injury had caused a major inconvenience to her mother.

"She is unable to do most of her daily activities as she is right-handed," Chan said.

"I now have to help her cook, eat and shower.

"Her left hand is not so strong as she is of quite an old age."

The police confirmed that a report was lodged.