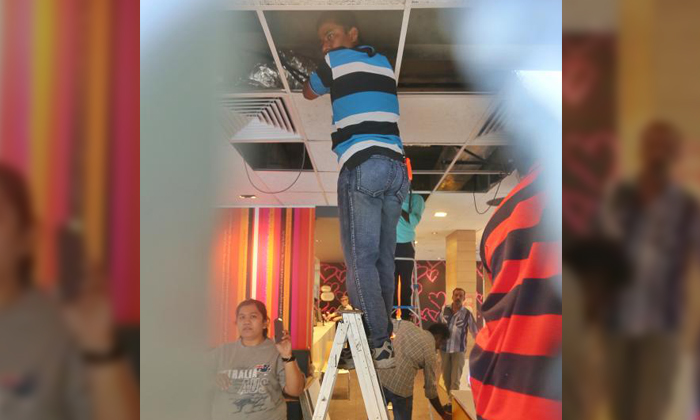 A section of the ceiling board at a McDonald's restaurant in Bedok fell on a female customer on Sunday afternoon (May 13).

The woman, who was in her 60s, was hit on the head by some of the falling parts while seated at the fast food chain's Block 538 Bedok North Street 3 outlet, at around 12.50pm.

A fruit stall vendor working nearby told Shin Min Daily News that he heard a "loud scream" from the restaurant.

The Singapore Civil Defence Force (SCDF) said it received a call for medical assistance at the restaurant at about 12.55pm.

One woman was conveyed to Changi General Hospital (CGH), which had been alerted to be on standby to receive her.

A spokesman for McDonald's told The Straits Times: "The restaurant manager on duty and our restaurant crew immediately attended to the customer, and called the ambulance which sent her to the Accident and Emergency department at CGH."

According to the spokesman, the customer left the hospital after the doctor confirmed that she had not suffered any serious injuries.

"Our senior operations executive was with the customer and her family at the hospital, and we are continuing to closely monitor the customer's condition," added the spokesman.

Investigations were carried out immediately and the store was temporarily closed for business. It reopened hours later at about 5pm on Sunday when it was determined that it was safe to do so, reported ST.

"We would like to assure all customers that building and customer safety are our top priorities and we are taking the necessary steps to prevent future occurrences," said McDonald's.