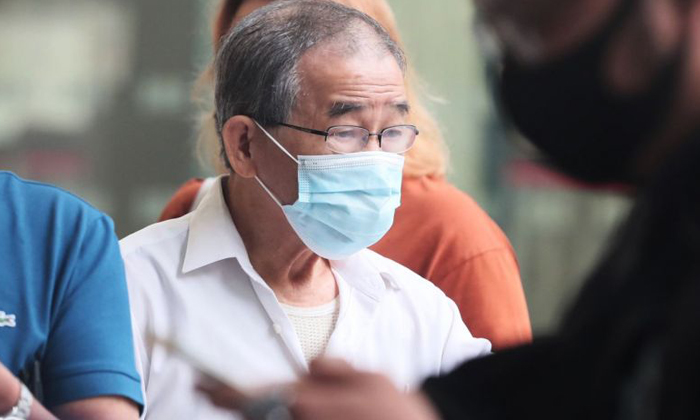 An elderly traditional Chinese medicine (TCM) practitioner, who reportedly cured a female patient of her persistent cough after a massage session in September 2018, allegedly molested the woman when she consulted him again the following month.

Lim Ah Bah is also accused of asking her lewd questions about her sex life, a district court heard on Monday (Oct 26).

The 74-year-old Singaporean, who worked at the Xin Hua TCM Clinic in Tanjong Pagar, is claiming trial to two counts each of molesting the woman and insulting her modesty.

The woman, now 41, works as a manager. She cannot be named owing to a gag order to protect her identity.

She took the stand on Monday - the first day of Lim's trial - and told District Judge Christopher Goh that she trusts only TCM treatments.

She testified that she went to Xin Hua TCM Clinic on Sept 24, 2018. A female therapist massaged her.

The alleged victim added that as she had a persistent cough, the therapist suggested that she also see Lim that day.

The woman did as she was told and the court heard that after taking her blood pressure, Lim claimed that there were a lot of "blockages" in her body.

She then agreed to let him massage her torso and testified that her coughs usually took three months to clear.

She added: "To my surprise, he managed to cure me within three days... (I had) no more cough."

The woman saw Lim again on Oct 1, 2018. She testified that on that occasion, he asked her questions about her sex life.

She said Lim also suggested that her boyfriend perform a sex act on her to clear her "blockage".

The woman told Judge Goh: "I felt very offended... This was a very private thing."

Despite this, she allowed Lim to massage her again. She also said that Lim then retrieved a container of gel and told her that he needed to massage her private parts.

She said that Lim molested her soon after.

When Deputy Public Prosecutor Claire Poh asked the woman what was going through her mind at the time, she replied: "I just felt this treatment was very weird and peculiar... Normally, my cough could take three months to cure... I believed him as a doctor."

The woman testified that Lim then massaged her before performing other procedures including acupuncture.

He allegedly molested her for the second time soon after.

The court heard that she then told him to stop and the session ended.

The alleged victim told the court that she later phoned the clinic's "lady boss" to tell her about what had happened.

For each count of molestation, an offender can be jailed for up to two years and fined or caned. Lim cannot be caned as he is over 50 years old.