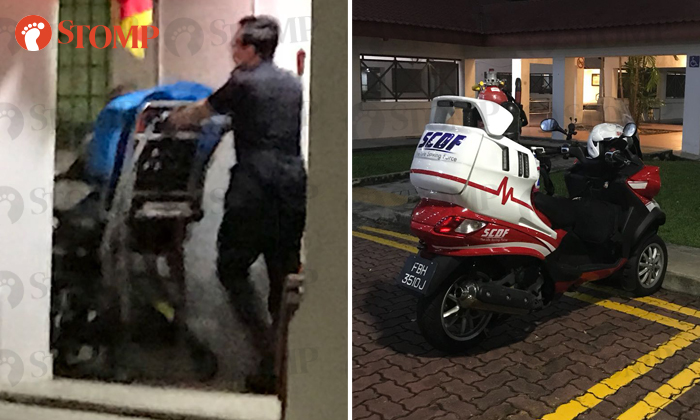 Neighbours of two elderly siblings who were found unable to move in their flat at Block 59 Circuit Road on Tuesday night (Sep 4) have revealed more details about the pair's plight.

Stomper Protection for the People had earlier alerted Stomp to the incident that occurred at around 10.45pm.

Stomp understands that the two had limited mobility.

When reporters from Shin Min Daily News visited the scene on Sep 5, they found out that the duo, surnamed Huang, are siblings.

The 72-year-old brother was ill in bed, while the 79-year-old sister had to rely on crutches to move around.

Their 19-year-old neighbour, a student idenitied as Shi, said that volunteers would send food to the siblings' door every day.

However, when he came home at around 10pm on the night of the incident, he realised that the food hanging on the metal gate had been left unclaimed for two days.

Sensing that something was amiss, Shi knocked on the siblings' door.

That was when he heard the Ms Huang's weak cry for help. She told Shi that she had fallen and did not have strength to get up, prompting him to immediately call for an ambulance.

According to Shin Min, Mr Huang suffers from kidney disease but has not gone for dialysis for a year due as his limited mobility made it inconvenient.

Ms Huang Yulan revealed that she has been living with her brother ever since he got divorced over 20 years ago and moved in with her.

"That night, I saw that he looked unwell and wanted to call the ambulance. It was raining and the sky was dark. I was going to switch on the lights, but ended up falling down," added Ms Huang, who was only discovered 12 hours later.

She also shared how she had previously injured herself at work during her younger days, resulting in a crooked spine. Fortunately, she only sustained a bruise on her back this time.

This is not the first time the Huang siblings have found themselves in a rut.

Another neighbour, Mr Zhang, said Mr Huang had fallen from a chair a couple of months ago.

Helpless as nobody could move Mr Huang, the siblings could only call for help through the door and were fortunately noticed by Mr Zhang.

Shi also pointed out that Mr Huang appeared extremely thin and frail, and that his feet looked like they had no strength at all.

Another neighbour wondered how Mr Huang could have deteriorated so quickly to the point of being bedridden, as he had seen the elderly man walking along the corridor only last year.

A silver lining to the siblings' predicament can be credited to their kind neighbours, who frequently check on them and help them to buy daily necessities.

"We have been neighbours for over 10 years and will take care of one another," added Shi.

Related Stories
Elderly man and woman not seen by neighbours for 2 days, found unable to move in Circuit Road flat
Elderly man trapped for an hour after falling into canal at Loyang Way
Man suffers head injuries after falling from 5th floor of Tampines block
More About:
elderly
rescue