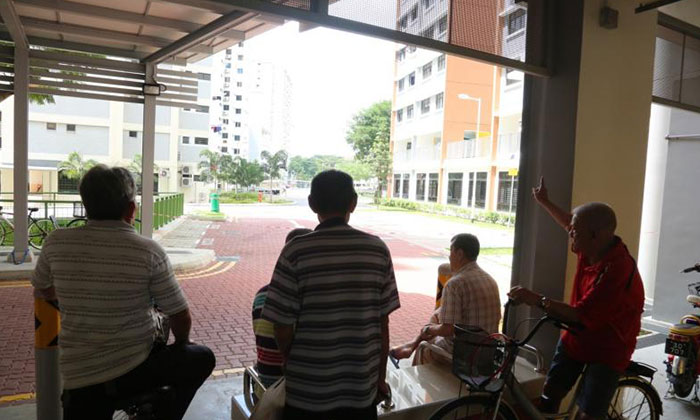 Some elderly residents at Cassia Crescent have banded together to form a patrol group in hopes of catching a culprit who has been dumping killer litter down a block.

Since Wednesday (Dec 6), there have been a series of killer litter incidents at Block 52 Cassia Crescent, and many residents are worried that they could be potential victims.

On Friday (Dec 8), the police cordoned off a car park at the foot of the block.

Additional officers were also dispatched to the area, but despite staking out the vicinity for four days, the culprit has yet to be caught.

Even with the additional security measures —- cordoning off the carpark, placing over 20 full-day operational close-circuit televisions (CCTV) in the block —- the culprit has continued the defiant acts, throwing down ceramic mugs, cans, and even a mahjong table.

This has left many residents worried that the objects could hit an unfortunate passer-by.

To aid the police in their efforts, a group of five to six elderly residents have taken it upon themselves to form a patrol group to keep watch in the neighbourhood.

A resident who did not wish to disclose his identity told Lianhe Wanbao that these unsung heroes have made a private arrangement amongst themselves so there would always be someone keeping watch.

According to the resident, their shift starts at 5pm every day.

When reporters visited the scene on Monday (Dec 11), an elderly resident, Mr Chen, 65, revealed that he was unaware if the culprit had thrown killer litter on Sunday (Dec 10).

He added: "I didn’t hear anything from the neighbours. I feel the police should activate their K9 unit to track down the culprit."

Related Stories
Members of Team Diversion Singapore perform first aid on injured rider -- whom other motorists forgot about
Singaporeans from all walks of life help old man who fainted and knocked his head on pillar at Boon Lay
Woman salutes group of motorcyclists who stopped to render assistance after accident at Seletar West Link
More About:
Heroes Among Us
vigilant
SPF