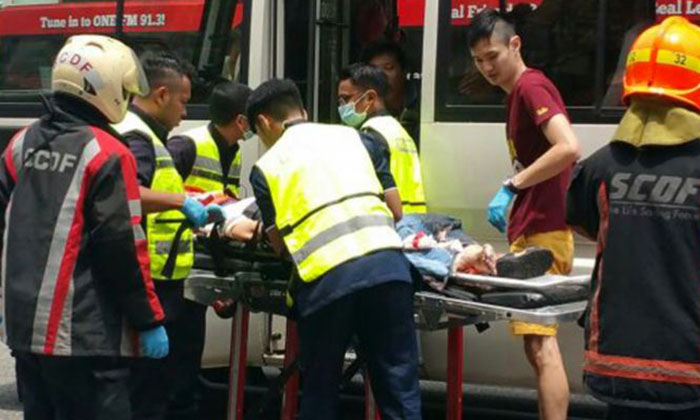 It was her right of way when crossing the road as the green man signal came on.

The lower part of her right leg was so badly mangled, it had to be amputated above the knee.

At around 12.10pm on Oct 14 last year, Wong was driving along Toa Payoh North when he reached the traffic lights at the junction of Lorong 1 Toa Payoh.

He was making a right turn when he hit Ms Yong, who was walking across the pedestrian crossing.

Yesterday, Wong was jailed two weeks, fined $1,400 and disqualified from driving all classes of vehicles for three years.

He pleaded guilty to one count each of causing grievous hurt by performing a negligent act, driving the bus without a valid licence and doing so without insurance coverage.

According to a medical report dated May 20, Ms Yong also suffered a traumatic brain injury and fractures in her pelvis, left ankle and the right side of her face.

She was in hospital until Dec 30 last year.

Investigations later revealed that Wong was not allowed to drive the bus as he did not have a Class 4 driving licence.

DPP Shi urged District Judge Salina Ishak to jail him for between one and two weeks and disqualify him from driving for three years.

Wong, who was not represented by a lawyer, admitted he had committed a grave mistake and sought the court's forgiveness.