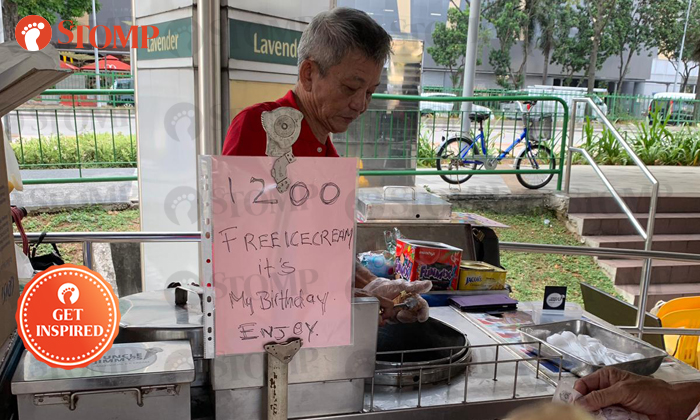 Shared joy is double joy -- or 1,200 times of happiness in the case of an ice-cream vendor located near Lavender MRT station.

Known affectionately as Uncle Jimmy, the 73-year-old man marks his birthday on March 22 every year by giving out free ice cream.

Stomper Raj was one of the lucky ones who enjoyed the treat last Friday.

He told Stomp: "I came to visit the Immigration & Checkpoints Authority (ICA) building and passed by this ice-cream stall.

"I wanted to buy some ice cream but the uncle told me there was no need to pay as it was his birthday and that was when I saw the signboard about him giving out 1,200 ice cream.

"He actually refused to take the money even though I offered to pay him. He turned me down and told me to just enjoy the ice cream."

Raj feels that the ice-cream uncle deserves recognition as it took effort to organise and execute the generous giveaway.

"It's his birthday but he still deliberately went to get stock, then came all the way here, put up a signboard and called out to everyone to come enjoy the ice cream," added the Stomper.

Jimmy Teng, who has been selling ice cream in Lavender for the past 15 years, had also announced the birthday treat on his Facebook page.

The first time Uncle Jimmy held the birthday giveaway was in 2016 and he had spent a few hundred dollars to prepare 1,000 servings of the dessert.

Related Stories
Remember uncle who gave free vegetables to CCK residents? Stomp thanks him with our Goody Bag
When some eateries charge for iced water, this restaurant's kind gesture is truly refreshing
Mosque in Jurong touches hearts by offering cold drinks to everyone, regardless of race or religion
More About:
inspiring
kind
heartwarming
kudos
elderly