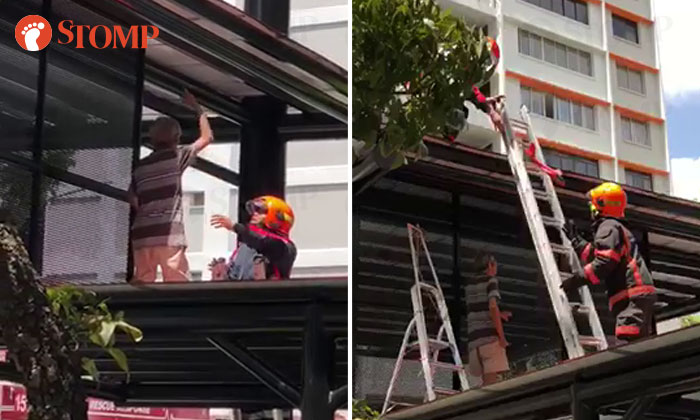 In an attempt to retrieve his grandson's toy plane, an elderly man found himself stuck on a walkway shelter at Block 109 Bishan Street 12 on Tuesday afternoon (Mar 26).

Stomper Wahidah, the man's neighbour, alerted Stomp to the incident and shared videos he took of the man's rescue.

"The man's grandson was creating a scene because he wanted his red toy aeroplane badly," said the Stomper.

"It had gotten stuck on the second deck of the sheltered walkway.

"The uncle had gotten his ladder and climbed up onto the shelter but was unable to climb up onto the higher deck."

In the compilation of videos shared by the Stomper, the man is seen perched on the sheltered walkway as people gather around him.

Stomp understands that the SCDF was called in by a witness who initially thought the elderly man wanted to jump.

According to Wahidah, the man refused to come down even after the police had arrived.

"The police came and asked him to come down but he did not want to as his objective was not completed," he said.

"Only after the SCDF officers helped to retrieve the toy did he agree to come down."

In response to a Stomp media query, the SCDF said it responded to the incident at about 2.10pm.

"A man was assisted to safety from a walkway shelter by SCDF using a ladder," a spokesman said.

Stomp understands he was not taken to hospital after coming down from the shelter.

In the video, the man appears to be shaky after returning to ground level but immediately walks over to his crying grandson to comfort him.

"I thought it's very noble of the grandfather to help the grandson but I'm not sure if he's mindful of the risk he put himself in," said Wahidah.

"I guess it just shows how much love he has for his grandson."

Related Stories
Man gets pulled back into Yishun flat by SCDF after stepping out onto parapet to clean windows
Man arrested after "prancing along" ledge of Sembawang block during 3-hour scene
Driver taken to hospital after being rescued from toppled trailer at West Coast Highway
More About:
rescue
shelter
scdf
grandfather
elderly
dangerous