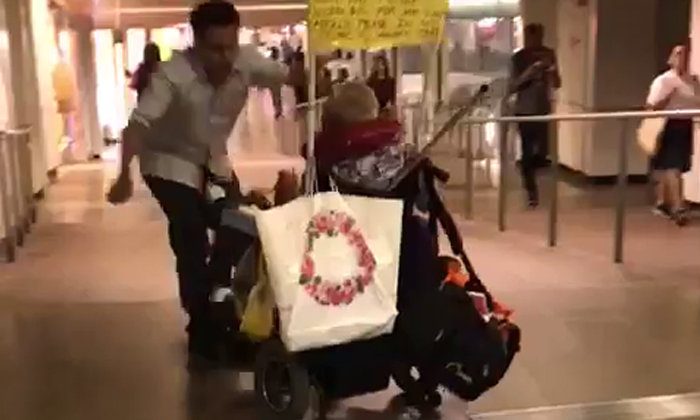 Police are investigating an incident where an elderly man was caught on camera attacking an SMRT employee while riding his personal mobility aid (PMA) at Bugis MRT station on Nov 21.

Facebook user Steve Goh posted a video of the incident on Sunday (Dec 15) with the caption: "Haha no safety belt and speeding!"

In the eight-second video, an elderly man who was on a PMA can be seen charging at an SMRT employee and trying to kick him.

The employee is seen backing up and trying to avoid the elderly man's blows.

Both parties end up on a ramp, where the elderly man falls from his PMA and lands in a sitting position on the floor.

A sign can also be seen attached to the PMA and it says: "Good day, I only need $10 for my daily meals, please do not let me go hungry today."

In response to queries, transport operator SMRT said its staff was on his rounds at the MRT station when he advised the PMA user that the selling of items is not permitted within station premises.

A spokesman added: "An altercation subsequently occurred between the PMA user and our staff.

"A police report was made and we are assisting with their investigations.

"We would like to emphasise that any physical or verbal abuse against public transport staff will be reported to the authorities. We are committed to providing a safe environment for both our commuters and our staff."

Related Stories
Video of PMA rider propping feet up against MRT door leads to all sorts of sentiments from netizens
Good that the elderly can travel around on PMDs, but they need to be educated on road safety: Stomper
Uncle riding PMA on the road in Little India is an accident waiting to happen
More About:
SMRT
dispute
elderly
pmd