Elderly man charged over Bendemeer Road stabbing, to be remanded at IMH for psychiatric observation 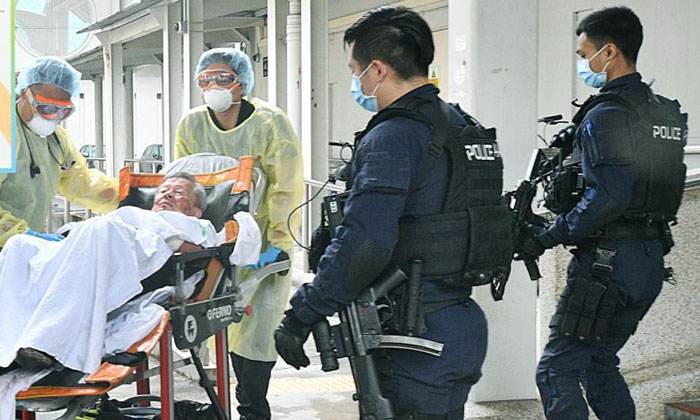 The man who allegedly attacked a father-and-son pair in Bendemeer Road on Tuesday has been charged with two counts of voluntarily causing grievous hurt with a knife.

Geo Kim Hock, who was charged in a district court on Thursday (Aug 27), is said to have used the weapon to stab Mr Goh Hung Kwang and Mr Raymond Goh Meng Chunat around 1pm on Aug 25.

Court documents did not reveal details of the relationship between Geo, 73, and the two victims.

He will be remanded at the Institute of Mental Health for a psychiatric observation.

According to earlier news reports, 69-year-old Mr Goh Hung Kwang was in his office, which is located above a coffee shop, when a man kicked open the door and charged at him.

His 31-year-old son - Mr Raymond Goh - who was next door, heard the commotion and tried to stop the assailant.

Police were alerted to the case, which happened at an office unit at Block 27 Bendemeer Road at around 1pm on Tuesday.

Geo, who was arrested, was also taken to TTSH.

His case has been adjourned to Sept 10.

For each charge of voluntarily causing grievous hurt with a weapon, an offender can be either be jailed for life or jailed for up to 15 years and fined or caned.

Geo cannot be caned as he is over 50 years old.