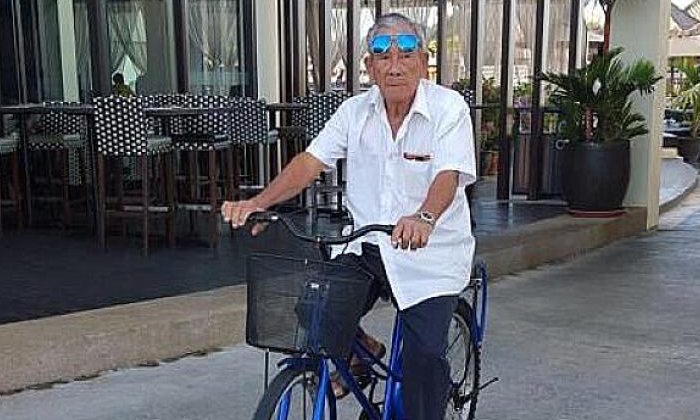 It would have been a year of milestones for Mr Peh Seng Yap.

He was due to celebrate his 82nd birthday tomorrow. A fourth great-grandchild is due in November and his eldest grandson's wedding has also been planned for the same month.

Sadly, Mr Peh was killed in a hit-and-run accident involving a heavy vehicle while cycling in Tampines last Tuesday .

His distraught family is appealing for witnesses after the police arrested a 51-year-old suspect for causing death by negligent act.

The case has been classified as a hit-and-run accident.

The police said they were alerted at around 1.20pm to an accident involving a prime mover and a cyclist at the junction of Tampines Industrial Avenue 3 and Tampines Avenue 10.

Mr Peh was taken to Changi General Hospital where he died.

His granddaughter, Ms Joyce Peh, 32, told The New Paper yesterday that the tragedy had ruined the birthday celebrations.

She said: "We had made plans to go to his home for steamboat to celebrate his birthday, like we do every year."

Ms Peh said Mr Peh was cycling home for lunch from a nearby temple, which he would visit in the morning to tend to his vegetable garden.

After lunch, he would go back to the temple before returning home for dinner.

She said: "My family is appealing for witnesses and trying to get video footage of what happened to him."

Mr Peh, who had seven children and 19 grandchildren, leaves behind his wife, also 81.

His death has hit the family hard, Ms Peh said, because he had no serious health issues except for high cholesterol, which was kept in check with medication.

She added: "If not for the accident, he would have continued on with his life with no problems. We didn't expect him to go just like that."

He had been looking forward to attending his eldest grandson's wedding in November as well as the birth of his fourth great grandchild, she added.

"He was very traditional and that was the wedding he was looking forward to the most. It was very important to him that he got to see his eldest grandson get married, and maybe later have kids," said Ms Peh.

There were 776 accidents involving heavy vehicles last year, up from 765 in 2017, police statistics show.

But the number of fatal accidents involving heavy vehicles fell from 33 in 2017 to 23 last year.

"The elderly and handicapped are especially vulnerable because they may not be as alert," he said.