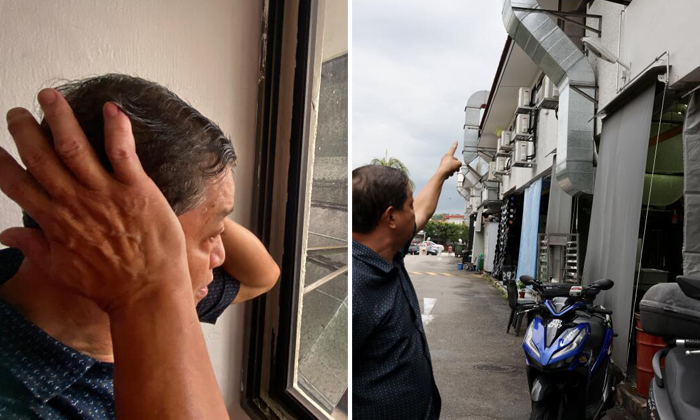 A couple living in a shophouse unit are finding it hard to enjoy a peaceful moment at home.

Each time the newly-renovated restaurant starts operating, the sound of its exhaust vent is so loud that Mr and Mrs Guo can hardly hear each other.

"It's like living near an airport," Mr Guo, 66, told Shin Min Daily News, describing the loud noises like those of airplanes flying past.

It was not this bad in the past, said the retiree who lives in a unit above the restaurant near Bedok Market Place in Simpang Bedok.

The situation worsened only after the restaurant went through renovations, and changed the design of the vent to face inwards, just outside the resident's toilet windows.

"We have lived here for over 40 years. The unit was previously an office before it was converted into a restaurant recently," said Mr Guo.

He added that the noise pollution gets worse at night.

Said his wife: "It is so noisy and loud that I cannot even watch TV or listen to music."

Following his complaints to the authorities, Mr Guo has been told that the restaurant management will need time to resolve the situation.

He had another complaint: the restaurant would play loud music late into the night.

"It goes on until about 2.30am sometimes," lamented Mr Guo. "How can anyone sleep?"

A staff member at the restaurant told Shin Min that the management is aware of Mr Guo's complaints and is looking into it.

"We have also reminded our customers to keep their volume down," said the staff.

Related Stories
Shhh! Man surprised by stranger on phone walking into his workshop to ask him to be quiet
Residents lose sleep over noisy late-night gatherings at Choa Chu Kang rooftop garden
Woman sells Bedok flat after putting up with neighbour's noisy parrot for a year: 'It's hard for us to sleep'
More About:
noisy
neighbour
restaurant
inconsiderate
Bedok