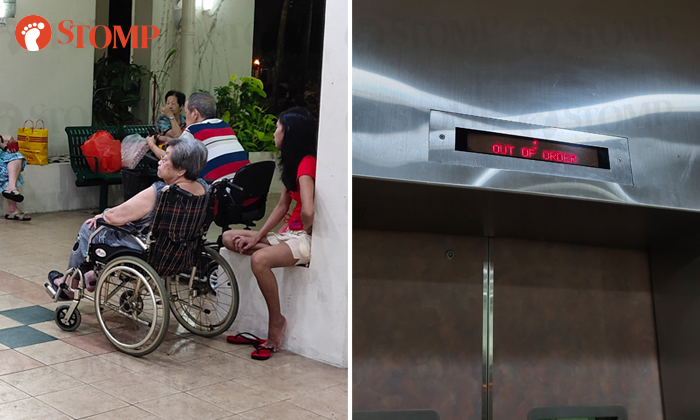 Elderly and disabled residents were allegedly left stranded after both lifts at Block 62B Lorong 4 Toa Payoh broke down on Saturday evening (Mar 7).

Stomper Trempest was about to leave the block after visiting his elderly parents at around 7pm when he noticed that "both A and B lifts were out of order".

He told Stomp: "One of the old folks who waited at the foot of the block said he had been trying to contact the Essential Maintenance Service Unit (EMSU) since 6.45pm that day.

"I overheard another lady complaining that the lift had been out of order for several hours."

"I called a total of eight times," he added.

"I couldn't get through three times. Another one time, the line got cut off while I was explaining what happened. And during the four times I got through, I had to repeat everything."

The Stomper said: "While I was on the call with EMSU, I insisted to know the cause and estimated time it would take to rectify the problem as there were elderly and disabled folks waiting to return to their units, just so I could explain the situation to them.

"I decided to walk downstairs to see if anyone needed help. I waited around with them and that's when I took the pictures.

"Someone presumably from EMSU arrived at about 8.15pm."

Stomp has contacted the town council for more info.

Related Stories
Lift at Bedok North HDB block temporarily shut down due to door malfunction
Pasir Ris HDB block lift breakdown: 'My pregnant wife had to climb up to the 11th floor'
Sembawang Town Council apologises for yet another lift breakdown at Woodlands Circle block
More About:
breakdown
lift