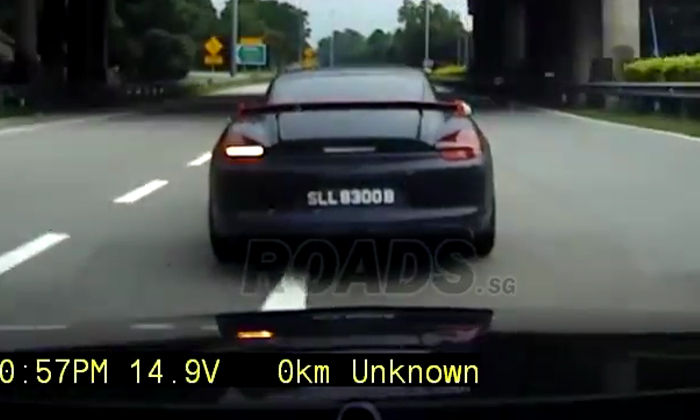 A Singaporean motorist encountered a Porsche driver who displayed road rage and acted like a bully on a Malaysian highway.

The incident took place on Sep 9 at 2.20pm, from Lima Kedai Toll towards Tuas Checkpoint.

Stomper Kai Jie alerted Stomp to a video of the dispute which ROADS.sg had posted on Facebook.

According to the video caption, the motorist, a Mercedes driver, was travelling at around 110km/h and had just overtaken a Malaysia-registered car.

A Porsche driver with licence plate number SLL8300B then approached from behind and overtook the Mercedes driver.

"He continued to slow down and then signalled me to stop at the side, which I refused," said the Mercedes driver.

However, the Porsche driver has since identified himself and responded to the incident on ROADS.sg's post.

Not everyone bought his story though, judging from the many angry retorts that he got in return.

One even said that the Porsche driver must have been going at a "super fast speed" and added "this type of driver should be removed from the road permanently."

Related Stories
Driver flashes high beam at car after being overtaken -- but who is in the wrong here?
Bully BMW driver cuts into motorist's lane without indicating than proceeds to block him on ECP
Motorist complains about ECP lanes being hogged by armed motorcade, only to get slammed by netizens
More About:
road rage
road bully
reckless driving
reckless driver
reckless
dangerous
porsche
mercedes
road hog
road hogging