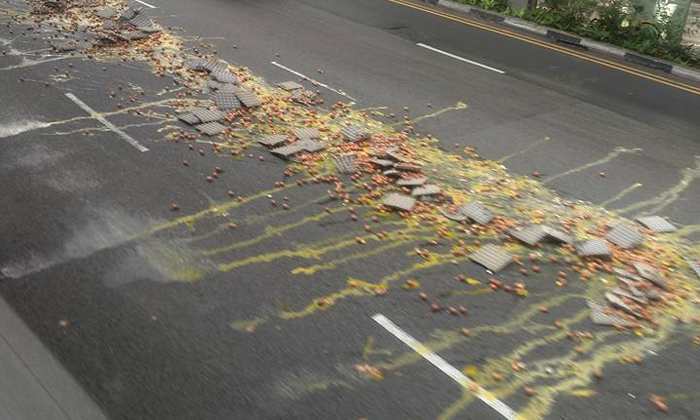 Numerous cartons of eggs, believed to have fallen off a vehicle, were left smashed near a busy junction at Orchard Road yesterday morning (July 27).

According to the Singapore Civil Defence Force (SCDF), the spillage outside the Mandarin Gallery stretched for about 15 metres, which is the length of around three fire engines.

In response to media queries by Stomp, SCDF said it was alerted to the incident at 10.25am and added, "In the interest of public safety, SCDF responded to clear up the affected area."

A water jet was used to clean up the affected area and no injuries were reported.

Netizens have been posting pictures of the scrambled mess online as well as images showing authorities at the scene.

Facebook user Katz A. Thalib said the driver was "MIA" (Missing In Action) while Randy DeMoville quipped, "And this why you don't place all of your eggs in one basket."

Related Stories
Driver at Keppel Rd finds out the hard way why it's a bad idea to be in lorry driver's blind spot
This will probably never happen to Changi Airport
Look at the mess left behind after wedding reception at Bedok Reservoir Rd block's void deck
More About:
egg
eggs
Orchard Road
mess
messy
egg spillage in Orchard