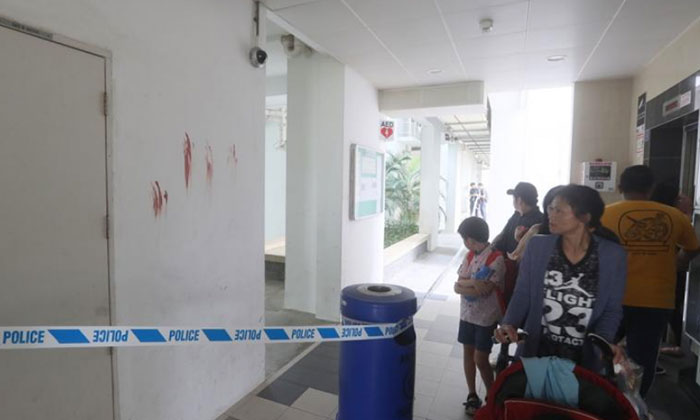 Residents of Block 672D Edgefield Plains were alarmed after 10 bloody palm prints mysteriously appeared at the ground floor of the block on Sunday (July 29), with the police subsequently cordoning off the area for investigations.

A resident of the block, Xie Xiaolin, 48, told Lianhe Wanbao that she was returning from a nearby supermarket at around 9am on Sunday when she heard from her neighbour that there were many police officers at the void deck.

“The neighbour told me that there were some bloody palm prints found on the ground floor lift lobby.

“Nobody knows who left them or what happened, but it looks horrifying.”

Reporters later visited the scene and found six to seven police officers at the void deck, with the area being cordoned off.

The officers carried out investigations on the palm prints which were left on the walls of the lift lobby and a void deck pillar.

Reporters observed that she of the palm prints were smeared in a downward motion, indicating that whoever left the prints was dragging his or her hands along the wall.

Furthermore, there were also blood stains on the ground beside the drain, believed to have been left by the same person.

A cleaner, Rasel, 38, told Lianhe Wanbao that he was cleaning in the area at around 7.20am but did not see the palm prints:

“When I was cleaning, I found two or three broken glass shards on the floor, but there wasn’t any blood on them, I threw them into the rubbish chute at the back and went on to the multi-storey carpark at the side to clean.

“I did not see any bloody palm prints at the time.”

The cordon was lifted at about 11.30am on the same day.

"The police confirm a report was lodged and investigations are ongoing."

Related Stories
Netizens baffled after car seemingly 'appears' out of nowhere, causing accident
For real? Mysterious entities caught on camera that take creepy to a whole new level
OMG! Is that a 'toyol' running around a carpark?
More About:
mystery
scary
punggol