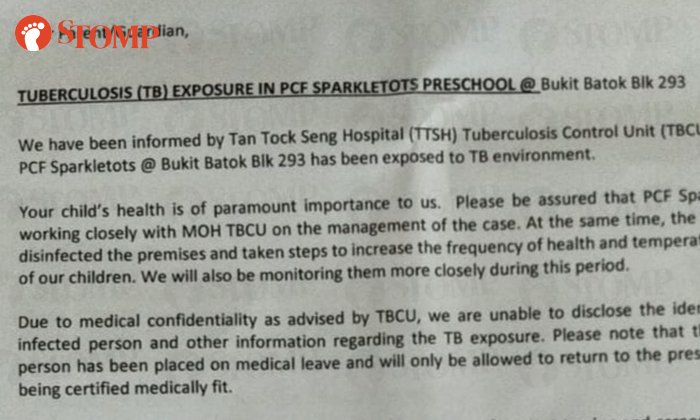 The Early Childhood Development Agency (ECDA) is currently working with the Tuberculosis Control Unit (TBCU) after a case of tuberculosis was reported at PCF Sparketots Prechool at Block 293 Bukit Batok.

A Stomper received a letter from the preschool as he and his wife were picking up their two children to go home on Dec 12.

He told Stomp: "We were given a letter and told to meet the principal.

"Parents of the kids met the principal individually as they went to pick up their kids.

"The teachers didn't say much and the principal told us not to worry too.

"We were told that the TB case occurred about two weeks ago and we don't know if this means the individual had just contracted TB or whether he/she had just recovered from it.

"Specific details regarding the timeline of events that took place prior to the announcement of the TB case weren't furnished to us as well."

The Ministry of Health (MOH) emphasised to Stomp in response to queries that "TB is typically spread through close and prolonged contact with an infectious individual, and not by contact with items or surfaces touched by a person with TB.

"In this case, only persons in close and prolonged contact with the infectious individual require screening by TBCU.

"As patients would be on medical leave and started on treatment, there would be no risk of further exposure to the workplace or school once the diagnosis is made.

"Early detection and treatment through screening of close contacts can help prevent further spread of TB.

"Workplace or school contacts found to have latent TB infection are also not infectious, and will be followed up by TBCU and managed accordingly."

MOH added:  "The MOH and the TBCU were notified on Nov 26 of one case of active tuberculosis (TB) at PCF Sparkletots Preschool at Bukit Batok Block 293.

"The case had been started on treatment and placed on medical leave immediately when the diagnosis of TB was made.

"There is therefore no further risk of TB transmission to the preschool from the case.

"Contact screening has started to identify close contacts of the case, and results of the screening are currently pending."

The Ministry of Social and Family Development told Stomp: "The ECDA is aware of the reported case of Tuberculosis at PCF Sparkletots Preschool at Bukit Batok Block 293.

"The TBCU has initiated contact tracing and identified children and staff who should undergo screening conducted by TBCU.

"ECDA is monitoring the situation closely, and is working with TBCU and the preschool to ensure the wellbeing of the children."