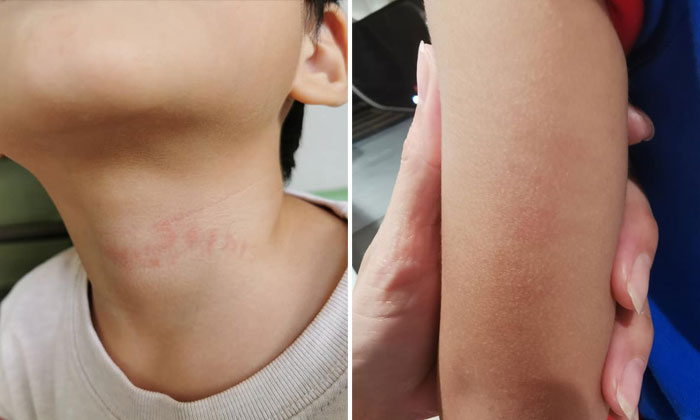 The Early Childhood Development Agency (ECDA) told Stomp the police are investigating a woman's claim that her three-year-old son has was abused by his preschool teacher at Bedok Reservoir.

Facebook user Mickie Sae said in her post on Oct 30 that her son, Eden, would come home with bruises and scratches on his body every three to four days from Sunflower Preschool.

In photos attached to the post, the boy is seen with bruises around his neck.

His mother wrote that the bruise looked like it came from a rope and took more than a week to heal.

Sae said that when she confronted the teachers about the marks on her son's body, one of them suggested it could have been an allergic reaction.

After visiting a clinic, a doctor wrote in a note that the marks "may be an imprint of an object on the neck".

She said that she called the preschool's principal and asked to view CCTV footage but has not received anything yet.

After lodging a police report in August, the principal allegedly told her that the CCTV on the day of the incident was broken.

In response to a Stomp query, the ECDA said it was alerted to the incident by the police in August.

A spokesman said: "The safety and wellbeing of children in preschools is of utmost importance.

"The Early Childhood Development Agency (ECDA) takes a serious view towards any case of child mismanagement.

"Preschools are required to report to ECDA any incidents that have an impact on the safety of children and staff.

"ECDA follows up on every alleged child mismanagement incident, such as through unannounced visits to preschools, interviews and verification of records.

"Immediate actions will be taken if our findings support the allegation.

"Preschool operators are also reminded through regular briefings and circulars to ensure vigilant supervision of children, and to provide guidance and support to teachers on classroom management.

"In August 2019, ECDA was alerted by the police to this incident.

"The case is undergoing police investigations.

"Meanwhile, ECDA is working closely with the preschool to ensure close supervision of children and provide guidance and support to the teachers in classroom management.

"We note that following the incident, the preschool reminded all their staff to abide by established procedures on child guidance and behaviour management, and tightened up on monitoring."

Related Stories
3-year-old boy found with bruises: Pre-school teacher suspended, police investigating
Maid who smacked 5-year-old boy and threw him onto ground at Punggol field gets jail
Man who kicked autistic boy in the stomach for 'playing roughly' near his son gets jailed 1 week
More About:
toddler
child abuse
childcare