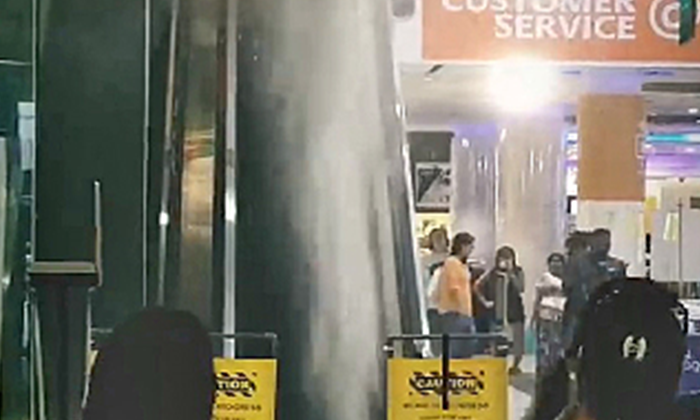 An escalator at Eastpoint Mall turned into a ‘fountain’ after a strong jet of water shot up from a burst pipe beneath and persisted for around half an hour.

The incident happened on Wednesday (Nov 8) at around 2 pm, reports Lianhe Wanbao.

A Facebook user Dwayne Low uploaded videos of the incident on his page.

In the footage, a spout of water could be seen gushing out from the side of an escalator, wetting the surroundings.

Barricades were set up to prevent shoppers from getting close to the stream.

Many bystanders were also seen taking videos of the incident with their phones.

"A place I call home! A situation happens, everyone will have to dig their phones out to capture 'the moment', including me!

"Haha, this happened today at East Point Mall! Go ahead and share it if you all want to. #SGSPIRIT"

According to another eyewitness, it is believed that a worker had misplaced a tool which fell and cracked a pipe, causing the jet of water to gush out.

After the incident, cleaners were quickly dispatched to mop up the excess water, while security personnel erected barricades to prevent members of the public from getting too close.

A shopper, Stella, 40, told reporters that there were many shoppers during the time of the incident and many gathered around to watch as the event unfolded.

She added that service and maintenance personnel responded quickly and the pipe was repaired after around half an hour.

In response to media queries, A spokesman for Eastpoint Mall said the incident had arisen over a burst water pipe.

No one was hurt and business resumed as usual.

Barricades were placed up during the process as a safety measure.