E-scooter that crashed into cyclist in fatal Bedok accident should not have been used on public paths: LTA 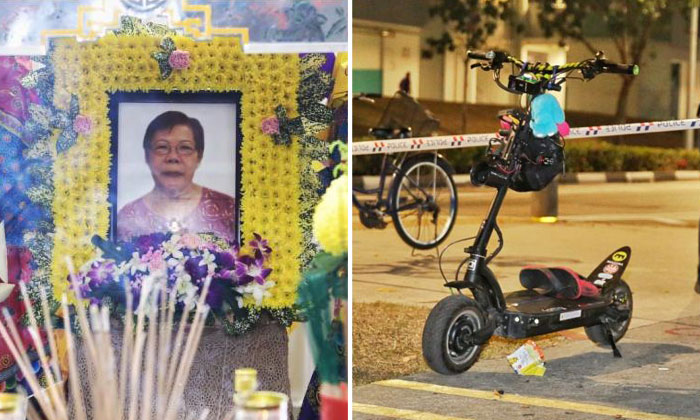 The e-scooter that knocked into a 65-year-old cyclist, who died after the accident, was a non-compliant personal mobility device (PMD), the Land Transport Authority (LTA) said on Thursday (Sept 26).

Madam Ong Bee Eng, a logistics assistant packer, died in hospital on Wednesday after she was seriously injured in the accident in Bedok last Saturday.

She had been in a coma at Changi General Hospital's Surgical Intensive Care Unit.

In a statement, the LTA said: "Based on checks by LTA on the PMD involved in this accident, the PMD involved was a non-compliant PMD which exceeded the prescribed weight and width limit for use on public paths under the Active Mobility Act.

"The unregistered device should not have been used on public paths."

It added that it has zero tolerance towards those who show "flagrant disregard" for regulations and endanger public safety.

A 20-year-old man was arrested after the accident for causing grievous hurt, and police said on Wednesday they were investigating the case as one of causing death by a rash act.

The offence carries a jail term of up to five years and a fine.

Separately, the LTA said on Thursday that the man could have committed an offence for riding a non-compliant PMD on a public path under the Active Mobility Act. This could result in a fine of up to $5,000 and/or three months jail.

There were 228 reported accidents involving PMDs on public paths in 2017 and last year, with 196 of them resulting in injuries.

In one case, a rider who skidded subsequently died from his injuries.

There were 32 cases which involved major injuries, such as concussions or fractures.

When The Straits Times visited Madam Ong's wake on Thursday, her nephew, who gave his name only as Mr Sim, 38, said the family had not discussed whether to pursue further action and will wait for the police to announce their findings.

Mr Sim said PMD users need to be aware of the consequences that speeding PMDs can cause.

A relative of Madam Ong, Mrs Lim Mei Yean, who declined to give her age, has called for more safety measures, such as a compulsory road safety course, to be put in place to avoid repeat accidents.

She said: "It may be a case of (being) at the wrong place at the wrong time but it can happen to anyone because PMDs are allowed on pedestrian paths. Every one of us is exposed to this risk.

"We understand the benefits of PMDs and the job opportunities they create, but to co-exist, rules must be in place now before another family has to go through devastating moments like this."

In an interview with The Straits Times last week, International Transport Forum secretary-general Kim Young-tae said that countries could take up to three years before they come up with optimal policies to address safety issues around PMDs.

The forum is an intergovernmental organisation with 60 member countries. It acts as a think-tank for transport policy.

While there have been calls for tougher regulations, there have also been calls to ban the devices, an option which has been ruled out by the Ministry of Transport.

A five-month old petition on Change.org calling for the ban of PMDs and e-bikes has been submitted to the authorities, after a sharp rise in the number of signatures following Madam Ong's accident.

On Tuesday morning, the online petition had about 9,000 signatures, but the number grew to more than 36,500 by 11pm on Thursday.