E-scooter rider who hit woman and left her with brain injuries, took drugs while out on bail jailed 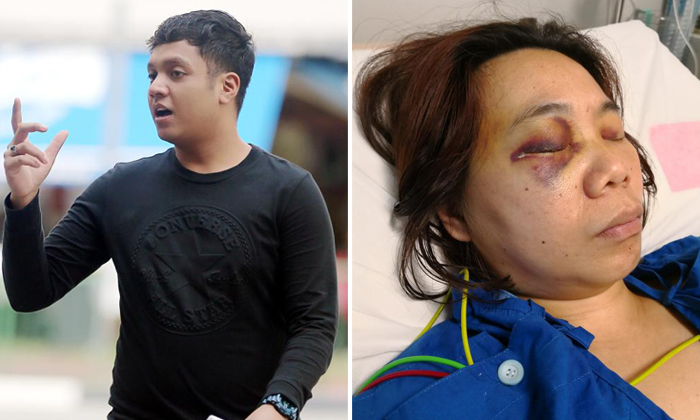 An electric scooter rider was using his device along a footpath in Bedok Reservoir Road when it hit a pedestrian, who suffered brain injuries after she was knocked to the ground.

The rider, Muhammad Sha'if Jumadi, 23, borrowed a passer-by's mobile phone to call an ambulance, but gave a wrong number when an operator asked for his contact details.

He then fled the scene without waiting for the ambulance to arrive.

After the accident on March 7 last year, Ms Goh Lay Yong, 45, had to stop working as an accountant. She now needs help with basic functions such as standing, walking and showering.

Sha'if was arrested at his flat a week after the accident and was out on bail when he consumed methamphetamine or "Ice".

He was sentenced to eight months and seven week's jail on Wednesday (Feb 13) after pleading guilty to causing grievous hurt to Ms Goh by performing a rash act. He also admitted to one count each of Ice consumption and possession.

Noting the proliferation in the use of personal mobility devices (PMDs)such as e-scooters, District Judge Marvin Bay said a deterrent sentence has to be imposed to strongly discourage rash, inconsiderate or unsafe riding within shared public spaces.

He added: “A deterrent sentence would reinforce the essential message for powered mobility device users to maintain a high level of situational awareness and be ever vigilant for the presence of other road users.”

Deputy Public Prosecutor Deborah Lee told the court that Sha’if was riding his e-scooter at a speed of about 22 to 25kmh at around 6pm on March 7 last year when he approached an overhead bridge near Block 151 Bedok Reservoir Road.

Ms Goh was walking down the bridge onto a footpath when the e-scooter collided into her as Sha’if was unable to stop in time.

She was flung to the ground and momentarily lost consciousness. Sha’if also fell off his e-scooter. He then borrowed a passer-by’s mobile phone to call for an ambulance and left the scene.

Ms Goh underwent surgery at Changi General Hospital. She was warded for 20 days and given 187 days of medical leave.

DPP Lee said that Sha’if had failed to surrender himself to the police despite knowing that they were looking for him. Officers arrested him at his flat in Bedok on March 14 last year and he was charged in court two days later.

Sha’if was out on bail when he was arrested for drug-related activities on July 23 last year.

Officers seized from him two sachets containing a substance which was later found to contain at least 6.84g of Ice. Traces of the drug were also found in his urine sample.

Defence lawyer Low Chun Yee, who pleaded for a sentence of eight months and four weeks’ jail, told the court that his client was remorseful.

The lawyer also said that Sha’if had intended to surrender himself to the police after the accident, but was arrested at home before he could do so.

Sha’if was offered bail of $15,000 and was ordered to surrender himself at the State Courts on Feb 25 to begin serving his sentence.