E-scooter rider who crashed into toddler at Boon Lay was allegedly defiant: "Why cannot ride here?" 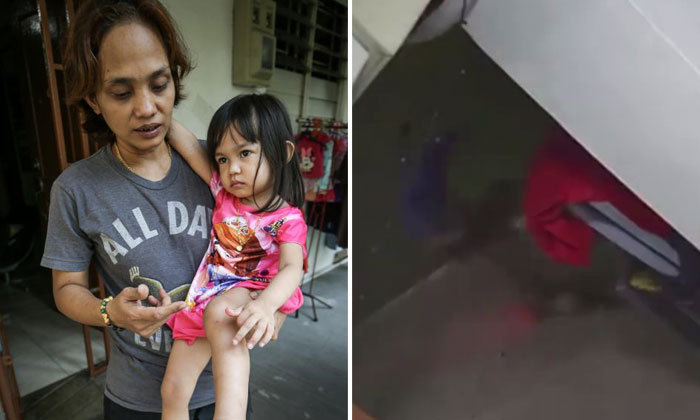 An e-scooter crashed into a toddler at a void deck on Sunday evening, mere metres from a notice warning users they can no longer ride in common areas of Housing Board blocks.

The collision left the three-year-old girl bruised and traumatised and sent the rider flying at Block 191 Boon Lay Drive.

The incident was captured by a surveillance camera installed outside the victim's home.

A 30-second clip was uploaded on Facebook by her father, Mr Garnell Glenn Bernard, a marine supervisor, 40, on Tuesday.

It shows little Nur Syahirah walking past a pillar and an e-scooter speeding towards her before a bang is heard.

Her mother, Madam Siti Aisah, 42, told The New Paper yesterday they were in front of their one-room rental flat at ground level at about 8.30pm when the accident happened.

"There was a loud crash, and I saw my daughter crying on the ground," the housewife said.

"She wouldn't stop crying and was so traumatised that she could not sleep at night."

Her neighbours ran out of their homes and detained the rider, whom they recognised as a 19-year-old living in the same block.

But the rider was defiant and argued he was allowed to ride in the void deck, said Madam Siti.

"He kept saying, 'Why cannot ride here?' and 'Anyone can ride here'."

"My neighbours got so angry at him that they wanted to hammer him," she added.

Madam Siti calmed them down and told the rider, who was bleeding in the leg, to leave.

She said she did not make a police report at the time as he is young and known to her family.

But Mr Bernard made a report yesterday evening after the rider allegedly accused Madam Siti of lying about the incident to a reporter.

The police confirmed the report and are investigating.

Users are supposed to push their PMDs in these areas.

A two-month grace period is in place until Oct 31 before users are punished for breaking the ban, which carries a fine of up to $5,000.

A notice informing the public of the ban was displayed at a lift landing a few metres from the accident scene. 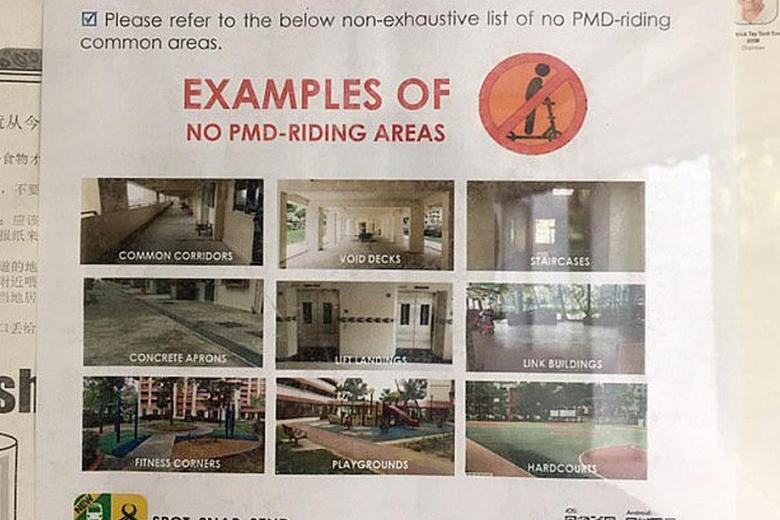 Madam Siti said her family had installed the surveillance cameras earlier this year for security reasons.

"I was talking to a neighbour about the cameras as she was thinking of getting them while my daughter was playing with the cats when she was hit."

Madam Siti said her husband had used an e-scooter but got rid of it about a year ago after experiencing the dangers first-hand.

"He had close shaves while using it to get to work and decided taking a bus was much safer."

She said she also helped put out a fire caused by a charging PMD at her block three months ago.

"It's better to just ban PMDs, or only allow delivery riders to use them," she added.

"Many teens use their e-scooter like a toy, racing around the estates and putting others in danger."

Other residents told TNP many PMD users live in the block, and groups of teens often zip around the estate.

Madam Rabaah Abdulghani, 46, who delivers goods for a living, said she has shouted at many of them for putting residents at risk.

"They speed at void decks even when there are children and elderly people around," she said.

Banning PMDs at void decks will work only if it is enforced by catching those who ignore the ban, she added.

Nee Soon GRC MP Lee Bee Wah, a strong advocate of a PMD ban, told TNP yesterday that riders like the youth who hit Nur Syahirah are irresponsible for riding in common areas.

She added: "I had called for a temporary ban in Parliament and allowing only those who passed tests and bought third-party insurance to ride PMDs.

"Cases like this show such measures may be necessary."

She also called on the Land Transport Authority (LTA) to step up enforcement.

"I hope LTA can help town councils with surveillance cameras... This will have a significant deterrent effect," she said.