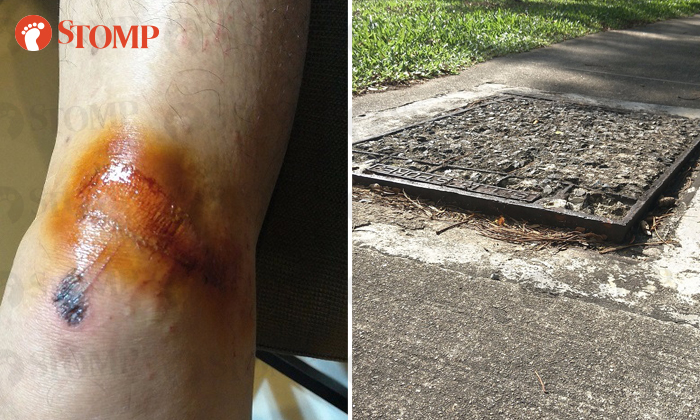 Stomper PinkyDear was injured after a bad fall while he was riding an e-scooter along Old Tampines Road towards Upper Changi Road North on Sunday night (Sep 10) at around 8pm.

He had ridden over a manhole cover that was protruding from the pavement.

PinkyDear told Stomp in a phone interview that he sustained abrasions on his knees, palms and the back of his hands.

As it was late that night and raining heavily the following day, the Stomper did not seek medical attention at a clinic or hospital and dressed his own wounds.

He told Stomp: "I was scooting at about 15km/h as that stretch of road is not well lit.

"The manhole cover protrusion above the pavement surface was about two inches high (around 5cm).

"By the time I noticed it, I had little time to react and was thrown off the scooter and fell to the ground.

"For the safety of other users, I suggest that the relevant authorities take action so that we can have a safer environment when using the pavement."

According to PinkyDear, he is currently still limping and is unable to bend or squat down properly due to his injuries.

Related Stories
Woman fractures arm after fall: She lost her balance due to 'sudden dip' in Roberts Lane walkway
NParks employee counselled after CC-ing jogger in email that says he is "out to find trouble"
More About:
fall
injured
Tampines
breakdown
faulty