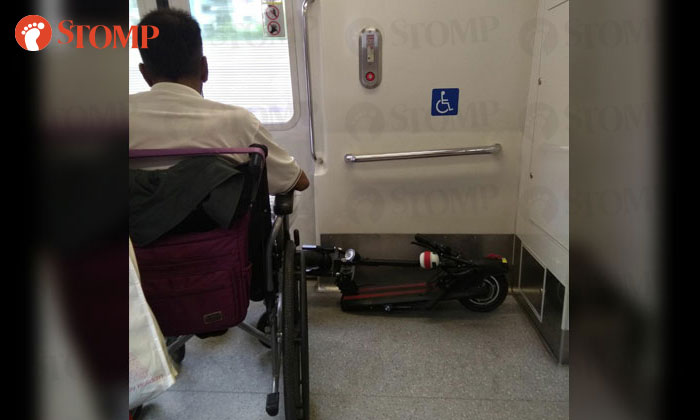 Sometimes a little courtesy can go a long way.

Stomper Sona's mother was frustrated when she saw an e-scooter left in a wheelchair space on an MRT train on Monday afternoon.

She and her helper were with her wheelchair-bound husband taking the North-South Line from Admiralty to Ang Mo Kio.

She looked around but the owner of the e-scooter was nowhere to be seen and did not come forward to remove the device.

"When my mother came back to tell me what happened, she was so frustrated and disappointed with the e-scooter owner," said Sona.

"My helper could not park my father at the allocated reserved place and they had to keep him in between the two train doors.

"I worried about how stable it would be for my dad due to the rocking motions of the train."

She added that this is the first time in the four years that her father has been wheelchair-bound that the family has encountered any inconsiderate behaviour.

"It would be nice if people thought about others and had a little bit of initiative," she said.