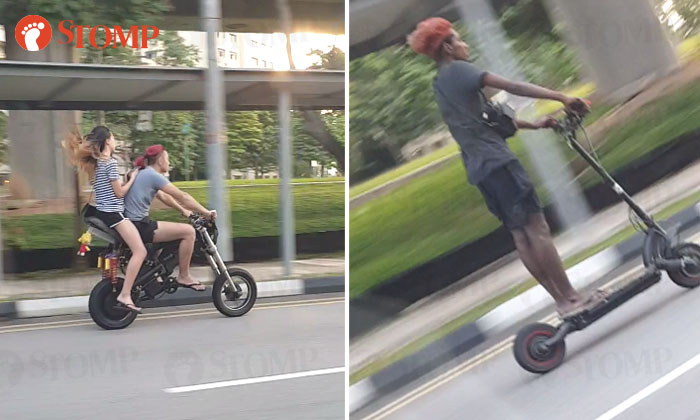 Riders of an e-bike and e-scooter were seen riding at high speeds along Boon Lay Way on Wednesday (Dec 26) at about 6pm .

They were captured on camera by Stomper Sylvia, who was in a car passing by them while she was on her way home.

She then sent the video to Stomp.

In the video, a woman was riding pillion on an e-bike behind a man.

Following the bike on the leftmost lane was an e-scooter rider.

Both the e-bike and the e-scooter were travelling at high speeds and keeping up with the other cars on the road.

Sylvia told Stomp: "I was in the car with my husband and both of us were shocked to see them going at such high speeds. They were going faster than the cars and overtaking them.

"None of them were wearing any safety gear.

"Before I took the video, I noticed them swerving between lanes too."

The Stomper said that she has not witnessed such riders along this stretch of road before, but had previously seen them in Choa Chu Kang.

Related Stories
Boy, 15, suffers liver injuries after accident with bus in Choa Chu Kang
These youths riding PMDs on the road in Punggol should make better use of their time
E-scooter rider trails behind bus travelling along Old Tampines Road
More About:
e-bike
e-scooter
dangerous
reckless