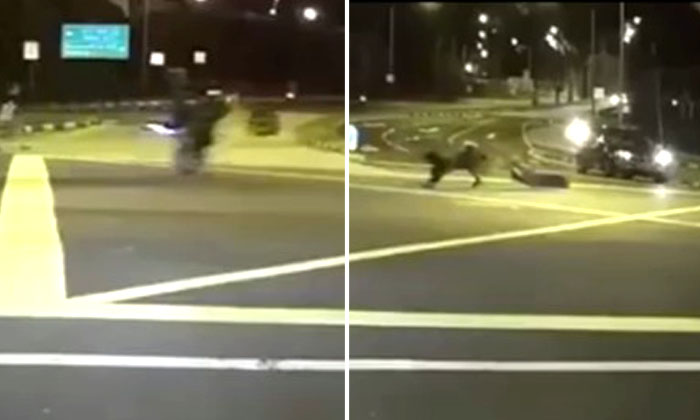 A video of an e-biker performing a wheelie in the middle of the road and failing has been circulating on social media.

The video shows a man on an e-bike attempting to balance his weight on the back wheel of his bike while crossing a cross junction.

Unable to keep his balance, he jerks forward and falls on his knees, quickly standing back up.

His e-bike slides across the road as he regains his balance.

The video ends with him picking up his e-bike and to get to the pavement just as a taxi passes him by.

A public bus can be seen trailing behind him soon after.

The date and location of the incident cannot be confirmed.

Stomper Patrick alerted us to the video which he saw on Facebook page Fabrications About The PAP.

He said: "When I watched the video I felt worried about the rider's safety. He is causing danger to both himself and others.

"It was very risky for him to attempt such a stunt and thankfully he did not get run over."

Many netizens took to the comments section to share their views on the incident, with many calling the stunt dumb and criticising him.