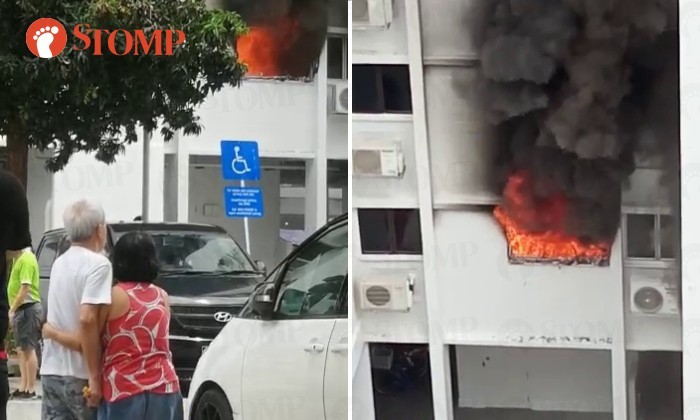 A fire in a Bedok flat on Sunday (Oct 23) had likely originated from the battery pack of a power-assisted bicycle (PAB) in the bedroom, said the Singapore Civil Defence Force (SCDF).

One person was taken to hospital for smoke inhalation.

The videos show flames and thick black smoke coming out of the flat window. People gathered to watch and at least three SCDF vehicles were at the scene.

"The fire involved contents of a bedroom and was extinguished by firefighters from Changi Fire Station using a water jet. There were no persons found inside the unit," said SCDF.

About 50 residents from the third to sixth storeys were evacuated by police.

A fire at Block 451 Yishun Ring Road on Oct 1 was also likely caused by an e-bike battery.

"SCDF would like to remind the public on the prevention of PMD (personal mobility device) and PAB fires, including not to charge batteries for an extended period of time or overnight. Do not purchase or use non-original batteries," said SCDF.

Related Stories
Firefighters breaks into flat with no one inside to put out bedroom fire at Jurong East Street 24
50 people evacuated after fire breaks out in living room of HDB flat at Stirling Road
2 Yishun fires in 1 day likely caused by power-assisted bike battery and portable powerbank
More About:
fire
scdf
battery
Bedok
PAB