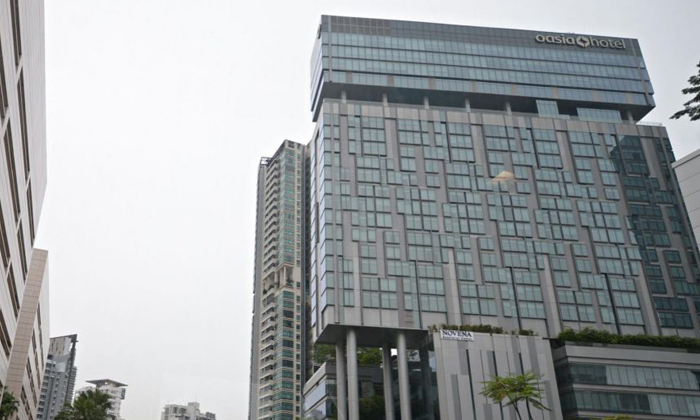 Two people who met on a flight to Singapore allegedly breached the conditions of their stay-home notice (SHN) at Oasia Hotel in Novena by meeting in one of their rooms after midnight.

Both face a charge of acting in a manner likely to spread disease, with Suresh facing an additional charge of failing to wear a mask outside his place of residence.

He is alleged to have left his hotel room between 12.30am and 1.21am on March 20 to go to Bharati's room on the same floor. He purportedly did not wear a mask at the time.

Bharati is alleged to have conspired with him to breach his SHN and allowed him into her room.

In a release on Friday, the Immigration and Checkpoints Authority (ICA) said the duo had met on an inbound flight on March 14 and were each served with a 14-day SHN. They were taken to Oasia Hotel to serve out their SHN in different rooms.

The ICA said: "To safeguard our community's health and safety, everyone needs to play their part and comply with the SHN requirements if they are subject to one."

If convicted, they may be jailed for up to six months and fined up to $10,000 for each charge.

They are expected to be back in court on Aug 17.

The ICA warned that foreigners who are convicted may face further action from the authorities, such as the revoking or shortening of the validity of permits and passes to remain and work in Singapore.

The public can report information about anyone who fails to comply with their SHN requirements to ICA at this website or call 6812-5555.

Related Stories
Jail for man who left hotel room during stay-home notice to meet wife on his birthday
Jail for Briton and S'porean wife who met in Ritz-Carlton hotel where he was serving SHN
South Korean man fined $7k for making false SHN declaration on arrival at Changi Airport
More About:
court
Covid-19
couple